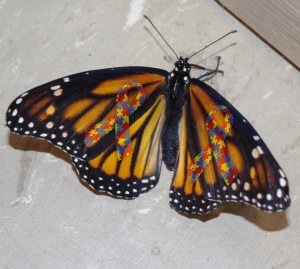 This past weekend, we went to the Museum of Science and Technology in Schenectady.  We had tried to go the previous two weeks, but large crowds made it impossible.  This week, though, we made it in.  Our mission: To see their butterfly house.

As we walked in, the boys could hardly contain their excitement.  They protested when we decided to catch a planetarium show that was starting very soon.  Nothing was going to come between them and butterflies!

After the show, they all but ran back to the butterfly house.  Upon instruction by a staff member, they took off their coats to keep butterflies from sneaking out in their hoods or pockets.  The staff member also told them not to touch the butterflies or try to get them to land on their hands.  Not only could you hurt them, but butterflies taste with their feet.  The oils and soap on your hands could hurt them,

Suddenly, NHL was much more reluctant to go in.  All of his enthusiasm for seeing the butterflies had drained out of him and he was now strongly protesting about entering.  We got him in the butterfly house, but he refused to move.  He just stood in one spot near the door and yelled loudly that he was afraid and wanted to leave.  Finally, we let him go out of the door to the butterfly house to a hallway were we could clearly see him.

Once he was out of the butterfly house, NHL calmed down a lot. He had a lot of fun seeing the butterflies through the glass and spotting the different types. However, any attempt to get him back inside was met with the same sharp rise in anxiety and renewed refusal.

Later, I asked NHL why he was afraid.  He told me that he wasn’t afraid OF the butterflies, but of hurting them.  With butterflies flying around and landing on many different surfaces, every movement he made was risking hurting a butterfly.  It didn’t matter how much he would have enjoyed seeing the butterflies up close, his empathy towards the butterflies fueled his anxieties and prevented him from getting close.  Far from having a lack of empathy, NHL was suffering from an excess of it.