The Case Of The App Hoarder 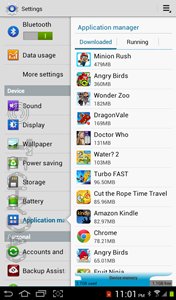 JSL has a problem.  He loves his Samsung Galaxy Tab 2, but there are just too many apps on it.  When I try to update it, it replies that insufficient space is available.  I tried various tricks to free up space, but nothing worked.  I even put a microSD card in, but his tablet’s version of Android doesn’t allow moving apps to the SD card.

It was clear that some hard decisions had to be made.

I sat down with JSL and explained the situation.  He understood.  Especially because this isn’t the first time we’ve hit this wall.  We began to go through the apps (read: games) on his tablet to see which we could get rid of.

"Fruit Ninja?  Surely we can delete that, right?  You never play with that one anymore."  "Keep it."

And so it went.  After going through over 35 games, he finally, very reluctantly, let me delete about four of them.  The good news is that this was just enough to let the other apps be upgraded.  The bad news is that his tablet is still low on space and it is only a matter of time before we need to go through this again.

How do you deal with a digital app hoarder?  What methods do you use to convince your kids that it is ok to delete apps that they don’t use anymore so that you can free up tablet space?