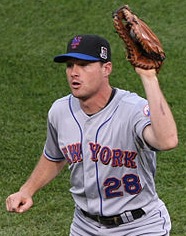 While browsing through my Twitter stream yesterday, I noticed a tweet from FiddleDeeAsh about sportscasters Boomer Esiason and Craig Carton lambasting New York Mets second baseman, Daniel Murphy for taking paternity leave when his son was born.  Daniel Murphy wound up taking three days off (as allowed by Major League Baseball paternity leave rules) and missed the first two games of the season.

Craig wondered why Daniel couldn’t just hand his wife off to a "good support system" so he could get back to his team and play baseball.  Boomer took it a step further and said he would have had his wife have a c-section so that he wouldn’t miss any games.  He actually said:  "This is what makes our money.  This is how we’re going to live our life.  This is going to give my child every opportunity to be a success in life.  I’ll be able to afford any college I want to send my kid to because I’m a baseball player."  Finally, on a different program, radio host Mike Francesa expressed the opinion that "you see the birth and you get back" and "your wife doesn’t need your help the first couple days, you know that."

Lest Boomer and Craig think that new dads sit around watching TV and grumbling to their wives that the baby is screaming again, we don’t.  When NHL was born, I would take my share of turns taking care of him.  I actually tried to do more than my "share" since B had done the hard work of giving birth to our new baby (something I obviously couldn’t do) and needed time to recuperate.

But if Craig had a grain of truth in his otherwise warped statement, Boomer was full-on looney.  First of all, a c-section is surgery.  It is a highly invasive process that puts the mother’s life in jeopardy (even if it is commonly done, it still carries risks) and can result in permanent scarring.  To suggest that Daniel Murphy’s wife should have had surgery just so Daniel could play baseball is beyond insulting.

Then there’s the "this is how I make my money" argument.  Sadly, this argument isn’t limited to professional sports.  Too many people in too many other occupations bring it up as well.  For all of our advances, many still think that a dad’s only role in bringing up a child is earning money with all of the "actual parenting" being the mom’s job.

How many times must we smash this stereotype before it stays smashed?

Earning money is important, but I doubt many kids grow up and think fondly on all of the money their dad made over the years.  What truly makes a father isn’t the size of your paycheck, but how you interact with your children.  Great fathers spend time with their children and bond with them like Daniel Murphy chose to do.

It wasn’t like Daniel Murphy was quitting baseball and somehow dooming his family to poverty with his actions.  He was taking a couple of days off as per league rules and then he went back to work.  The Mets aren’t going to fire him for this.  Honestly, if I worked for a company and they wanted to fire me for daring to take time off to be with my wife after she gave birth, I’d rethink how much I’d want to work for that organization.  (Thankfully, I never needed to do this as my boss at the time let me take off as much time as I felt I needed.)

Finally, we get to Francesa’s comments.  Somehow, I think that "I’ve seen the birth, I’m done here" is missing something.  Like maybe that baby that was just born!

As for "your wife doesn’t need your help the first couple of days, you know that"… Actually, I didn’t know that.  So you mean right after my wife pushed a watermelon out of her, when simply going to the bathroom was a challenge, when she was mentally and physically exhausted because she had essentially run a marathon (child birth isn’t a "I’m going to give birth now – oh, there’s the baby" affair), she didn’t need any help at all?  I beg to differ.  If anything, my wife needed me more than ever at that point.  I couldn’t shoulder the physical burden of childbirth for her, but I could shoulder as much of the baby-handling responsibilities as I could right after child birth so that she could rest and recuperate.  If Mike Francesa’s wife was able to do everything to take care of the baby immediately after childbirth, then more power to her, but most women don’t recover instantly.

In the end, Daniel Murphy missed two small games of baseball – the first two of the season.  While those games might be big on pomp, they really don’t make a big difference on how well the team does throughout the rest of the season.  Plenty of teams have started their season with a few horrible games and then did great.  Many others started with a fantastic winning streak before it all fell apart.  Daniel Murphy’s absence wasn’t going to somehow doom his entire team.  Even if he was going to miss game seven of the World Series, however, being there for the birth of his child was the more important event of the two.  He made the right choice and these commentators are horribly, horribly wrong.  I applaud Mr. Murphy for his choice to be a great husband and father and wish more people would recognize that dads are more than just "backup parents" and "wage earners."

NOTE: The photo of Daniel Murphy above is by Keith Allison.  It comes from the Wikimedia Commons and was posted under a Creative Commons Attribution-Share Alike 2.0 license.