How The Simpsons Tempted Me To The Dark Side 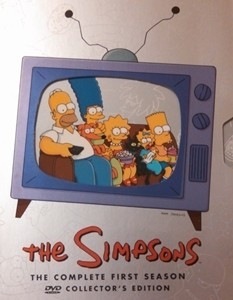 For the most part, I’m a law-abiding citizen.  I like staying within the legal lines.  My "criminal record" would be a boring read – if it weren’t nonexistent.  So when it comes to obtaining movies and TV shows to watch, it should be no surprise that I do things the legal way.  I stream from Netflix, Amazon VOD, record using my DVR, purchase DVDs, or rent DVDs from the library.  I never, ever download the videos in those less-than-legal manners that the copyright owners haven’t approved.  Recently, however, I was sorely tempted.

A couple of weeks ago, while walking through a local store, we saw the new line of Simpsons Lego minifigures.  Of course, my boys wanted them.  They didn’t care that they had never watched a single episode of The Simpsons or that they wouldn’t be able to tell which one was Bart and which one was Milhouse.  All they cared about was that these were new Lego minifigs.

I decided that perhaps the time had come to introduce my boys to The Simpsons.  I pulled out my DVD copy of The Simpsons: Season 1 (a present from B years ago and yet still shrink wrapped).  We watched the first episode and my boys were hooked.  They quickly got through the rest of the first season.

This was where we hit a wall.  How would we get the rest of the seasons for the boys to watch?  The Simpsons is no ordinary TV show.  It has been on the air for 25 years and has amassed five hundred and fifty episodes.  We could purchase each of the DVD sets for seasons 2 to 24, but that would cost over $460 – way too expensive for our bank account.  If Netflix had them available, we could stream them from there, but sadly there isn’t a single episode on there.  They aren’t available via Amazon Prime either.  Amazon’s VOD service has some of the episodes, but not all.

This leaves me with two legal options.  First, I could take them out from the library.  We actually wound up taking Season 2 out of the library, but only got to keep it for four days (two days plus a renewal time of two days).  That was only enough time to watch one of the four DVDs in the set.  We could have kept the set out longer and paid late fees ($0.25 per day), but at that rate we would have needed to pay $3 per season or $69 to watch the entire set.

Alternatively, I could subscribe to Netflix’s DVD streaming service for the duration of our Simpsons watching time.  Given that it would have taken us about 16 days to get through a set, we would have needed to subscribe to Netflix’s DVD streaming service for just over a year.  (This is assuming no downtime of needing to wait for the next disc to arrive.)  This would cost about $130 – even more than the library option.

Clearly, there is no easy, inexpensive way to watch The Simpsons from the beginning to the present episodes.  Or is there?  While I haven’t actually done it myself, I do know in theory how to download items from less-than-legal locations.  If I really wanted to, it wouldn’t take me long to get rips of the DVDs on my computer for the boys and I to watch.  I might even be able to do it in such a fashion as to avoid detection by the companies that watch for people illegally sharing files.

Still, I might slip up and be found.  A fine of even $750 per episode (the minimum fine for a copyright violation) could still work out to over $350,000.  At that rate, we might as well buy all of the DVDs – a hundred times over.

On the other hand, there are sneakier ways of pirating material.  Take the library, for example.  Taking the DVD out from the library is completely legal.  Once it is time to return it, it goes back and we can’t watch it again unless we take it back out.  What if we ripped the DVD though?  We would then be able to watch the episodes at our leisure.  I could even assuage my conscience by telling myself that I’ll delete the episodes when we’re done with them and that it’s just an "extended library loan."  My chances of being caught doing this are virtually zero.

So what is stopping me?  My children.  I want to set an example for them.  If I believe that downloading copyrighted material without authorization is wrong, then what kind of lesson would I teach them if I bent my moral rules for the sake of convenience?  Sometimes doing the right thing is difficult.  Sometimes doing the right thing means going without something you really want.  It can be very easy to shrug off your morals and take "the quick and easy path."  The dark side did tempt me, yes, but I refused to give in.  We’ll watch The Simpsons the slower, but legal way of library rentals.  I just wish the content owners would license The Simpsons to Netflix so that my boys could view it in an easier, but still legal fashion.

NOTE: The "Simpsons DVD" image above was taken by me of our Season One DVD set.