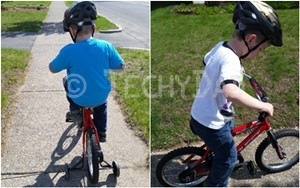 Before JSL’s birthday, we took him to a couple of stores looking for a new bike.  His old one, a hand-me-down from NHL, was getting small for him and B’s parents wanted to buy him a new one.

After looking for a few bikes, we came to the conclusion that we want JSL to learn to ride without training wheels before buying him a new bike.  This way, his current bike will get any dings and dents from learning-to-ride falls and the new bike will stay looking nice for as long as possible.

So, with the sun shining and the weather feeling nice and warm, I removed the training wheels from JSL’s bike and we went out to the sidewalk.  JSL nervously climbed atop his bike and I held him steady as he pedaled forward.  Soon, I was letting go more and more.  I could tell that he was on the brink of figuring out how to balance – even though he had just started.

It seemed as though he needed something to push him a bit (metaphorically speaking) and decided on a method of giving JSL some incentive.  Every so often, when I could tell that he was balancing well, I would let go of him and count silently.  Then, after he put his feet down to stop or I stepped in to prevent a fall, I would tell him how many seconds he stayed up.  JSL went from two second rides to four and then five.  Finally, he got an eleven second ride and went running up the block screaming it over and over to B.  The next day, he topped that and got to fourteen.  He seemed determined and well on his way to riding without training wheels.

Then, this weekend, we tried again.  This time, he was a lot less sure of himself.  I didn’t bother telling him how many seconds he stayed up because telling him "two seconds" would make him less confident – not more.

I did notice a pattern, though.  JSL’s balance was pretty good with me having to provide minimal guidance until I let go.  Then, suddenly, he would either begin veering towards the grass (to soften his fall but instead causing him to lose his balance) or would overcorrect and swerve his front wheel left and right until he lost his balance.  If he only had enough confidence in himself, he would likely just take off down the street.  Instead, fear is holding him back.

We’re now on the lookout for any way to help JSL learn to ride his bike.  B’s brother has been using a bike trainer handle (like this one) with his child and this might help JSL also.  Any suggestions are welcome, though.

What did you do to help your child learn to ride a bike?