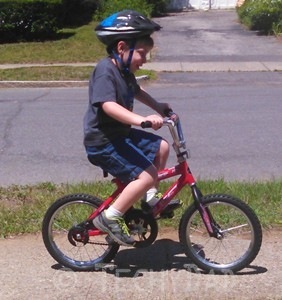 They grow up so quickly.

Around his birthday, B’s parents told JSL that they wanted to buy him a new bike.  His current bicycle, a hand-me-down from his older brother, was getting too small for him so it was time to upgrade.  One problem:  The new bike would be too big to include training wheels.  That meant JSL would need to learn without them.  Since we wouldn’t want the new bike to be scratched from learning-to-ride falls, we decided to hold off on the new bike and just remove his training wheels on the current bike for now.

At first, JSL couldn’t get the hang of riding.  As I held onto him, he would lean towards me and then away from me.  Over the course of the first day, he began to get better and better.  Finally, I began letting go.  He would go for a second or two on his own before running into trouble.  The more practice he got that day, the better he got.  I would silently count and tell him what he got afterwards.  He got up to eight seconds and was so proud of himself.

The next day, we resumed his practicing and he got up to twelve seconds.  As every record was shattered, he’d scream out the new number.  I bet everyone on our block was wondering why he was shouting seemingly random numbers.

By Saturday, it became clear that JSL had mastered balance.  Unfortunately, his confidence was lacking.  He would be perfectly balanced with my hand on him (but not really supporting him), and yet the minute I let go he would veer towards the grass in an attempt to fall softly.

Thinking that perhaps our short up-and-down the block excursions were too short to build his confidence, I took JSL on a long bike ride a few blocks away from our house and back.  Though I held on to him most of the time, he balanced really well.

Awhile after we got back to our block, JSL was pedaling up our block and I let go of him.  As usual, he kept going.  But he didn’t stop.  He just kept going and going.  We have the "he’s got it" moment.  B was sitting outside the house when she saw him pedal past – followed by me running to keep up.  (He wore me out by making me run after him up and down the block.)

Our little baby was officially a bike rider.

Starting up still required mom or dad to push him off so he worked on that next and, by yesterday, had that figured out.  He’s growing up so quickly.  While I’m sad that he won’t need me to hold on to him as he rides anymore, I’m so proud of him for figuring out how to ride a bike.  I’m looking forward to going on some bike rides with him in the future.

Until then, I’d better get used to this view. 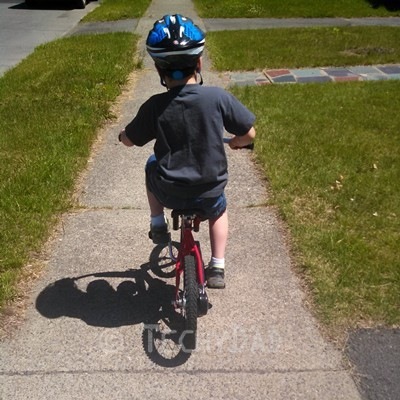