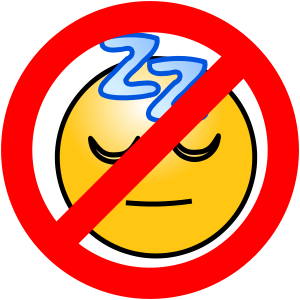 The past few nights have been particularly rough.  This first night after my surgery, I was tired enough to sleep, but woke up constantly with drainage that required bandage changes.  The next night, I woke up at 2am and couldn’t fall back to sleep until 4am.  During that time, I began having panic attacks about not being able to breathe.  The night before last, however, was the worst yet.  I got to sleep at the respectable hour of 11pm.  I even delayed sleep to make sure I was very tired.  I stayed asleep until 1:30am – A mere 2.5 hours.  Then, I was awake.

I had planned for this and tried various things, reading a book (Harry Potter and the Deathly Hallows which proved too exciting to lead to sleep), watching TV (nothing good is on at 2am and I couldn’t find anything on Netflix to watch), I even caught up on nearly all of the feeds in my Feedly reader list.  However, just when my eyes started to get blurry and I could feel myself drifting off, sleep would elude me and I’d suddenly be awake again.

At around 5:30am, I gave up and accepted the fact that I wasn’t going to get any rest.  Oddly enough, I wasn’t totally exhausted.  If anything, I felt wired.  After B dropped the boys off at camp and after we had breakfast, I went for a walk around the block because I felt like it.  It was a nice day – not too hot and not too cold and not too humid.  Moving my legs made me feel better.  I did take a quick 15-30 minute cat nap at one point after returning home, but I didn’t feel too bad.

In fact, my nose began to feel better as the day went on.  As of this writing, the night before this goes live, I’m both hopeful that I’ll get a good night’s sleep and frightened about having another sleepless night.  If you see some odd tweets from me around 2am, take it as a sign that my insomnia returned and my brain has finally snapped under the strain.  Then hop on over to B’s twitter feed because I might just be taking her along with me on the insomnia ride to crazy town.

NOTE: The "insomnia" image above is composed of Emoticons: Sleeping Face by nicubunu and No-Sign by skotan.  Both are available via OpenClipArt.org.