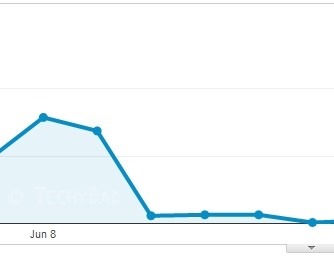 Last month, I was browsing through our Google Analytics reports when I saw something shocking:

Yes, that was her analytics numbers flat-lining.  She went from a respectable amount of traffic to only a couple of page views a day.  Something was obviously seriously wrong.  I immediately ruled out her traffic actually dropping.  Traffic numbers just don’t drop like that unless you do something monumentally stupid online to cause your readership to flee, and B didn’t do anything even remotely like that.  So what could it be?

As we thought it over, I suddenly remembered.  B had told me to add in a plug-in for a blogging program she’s a member of.  I installed that plug-in on the night before the analytics plunge.  That must have been to blame.  We e-mailed her contacts and they were very helpful, but they had never seen anything like this before.  After some investigation, I realized that their plug-in was adding Google Analytics code just before my Google Analytics code.  Their code must have been interfering somehow with our code resulting in the lowered numbers.

I couldn’t modify their plug-in, but I was able to modify the theme on B’s site to move our Google Analytics code higher.  (One of the perks of being a web developer.)  Then, it was a matter of waiting to see what would happen.  Would her numbers rise back up?  Or would there be something else preventing the numbers from being reported right? 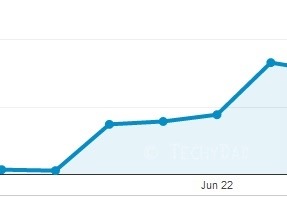 Luckily, her numbers started going back up until they were back to normal.

The lesson here is to keep an eye on your Google Analytics closely.  This is especially true if you’ve made any changes to your blog recently.  B was lucky that her reported numbers only dropped for 10 days.  Had I not checked in when I did, we could have gone for much longer and then, when she needed to report recent traffic amounts for blog campaigns, she wouldn’t have had good information to report.

Have you ever encountered a dip in your blog traffic due to technical difficulties?