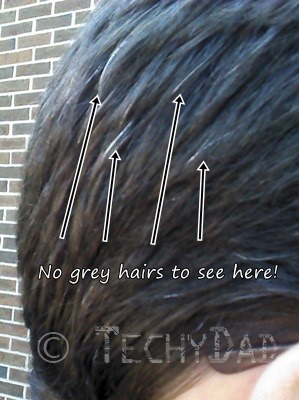 Over the weekend, we brought the boys to a local museum.  While there, we had a lot of fun.  One "exhibit", wasn’t very fun, though.  It wasn’t fun at all.  While, I was sitting down watching the boys play with a water table (seeing how blocking the water changed the flow, B mentioned to me that she hadn’t noticed how grey I had gone.  Now, I had seen the occasional grey (maybe white) hair in my chest hair, but I thought the hairs on my head hadn’t gone grey yet.  She insisted she saw them, though.  I had to know so I took a quick photo of myself.

I can handle a lot of things, but as far as getting old is concerned, I’ll admit that my strategy has been Denial.  I’m not approaching 40 fast even though I celebrated my 39th birthday recently.  My hairline isn’t receding despite what B keeps saying.  Those back aches when I wake up in the morning aren’t because I’m getting old.  The fact that the music I listened to growing up is on the oldies station means nothing!  The fact that I’ve caught myself referring to college students as "those kids" multiple times was just a slip of the tongue.

I try to believe that I’m still the same person that I was when I was 21.  In some ways, I am, but in many more ways I’m not.  I’ve got to face facts that I’m aging.  Before I know it, I’ll be having a mid-life crisis.

As a side note: I’ve thought long and hard about my mid-life crisis.  I’m not one for sports cars and I’m DEFINITELY not one to chase after some young woman.  As far as the former goes, I’ve always been practical automobile-wise.  As far as the latter goes, I’m happily married.  I’ll stick with chasing after my wife, thank you very much.  So what to do for a mid-life crisis?  In true Techy fashion, I think I might go tech for my crisis.  I’ve found that, over the years, I’ve gone from buying things because they are latest and greatest to trying to financially justify each tech purchase painstakingly.  I might, for my mid-life crisis, forget about financial justifications and just get some really cool tech.

Back to denial, though, because I’m not going to go through that mid-life crisis for a long, long time.  After all, I’m still very young and not getting old at all.  Or, at least, that’s what I’m going to continue to tell myself.

Oh, and about that hairline thing?  Here’s a morph of me from 2005 and me from yesterday.  Do you think my hairline is receding?

Now, if you’ll excuse me, I need to yell at some kids to get off my lawn!