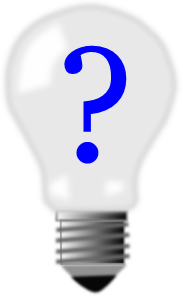 On Wednesday, I picked JSL up from B’s parents house and started running some errands before coming home.  On the way, JSL and I got to talking, as we usually do.  I don’t remember the conversation much.  It was likely the usual things.  School, books he is reading, stuff he wants to do, stuff he has done.  That sort of thing.  Something in the conversation sparked an idea, though.  An idea for a great post topic.

I’ll admit that great post topics are hard to come by at times.  All too often, I’ll sit in front of my computer, with the blank post window staring back at me, wondering just what I should write before it gets too late.  Too many times, I get annoyed by the stares of the blank window and the emptiness of my idea bank and turn on the TV or do some idle web surfing to try to spark something.  Why I do this, I don’t know because it almost never works.  Instead, I find the hour even later with still no post in sight.

So when I had this idea, I should have written it down.  Obviously, I was driving at the time so jotting down the idea while steering the car was a no-no.  Still, I was in an area where I could have pulled over and quickly sent myself a reminder e-mail.  I didn’t, though.  I was sure I’d remember the idea later.  We all know how that usually turns out.

Now the idea feels like it’s still in my head, but just out of reach.  The more I grasp for it, the more it slips *just* past the edge of my mental fingertips.  It feels like if I just strain a bit more, I’ll recall it, but nothing seems to bring it back.  I even asked JSL if he remembers what we were talking about in the hopes that this would re-spark the idea, but he’s forgotten the topic of conversation.

So it seems that the idea is lost and – turning lemons into lemonade – I’ve turned the loss of the blog post idea itself into a blog post.

On a related note, while lamenting the loss of my idea, I noticed that the latest Dork Tower had been published by John Kovalic.  In it, he deals with ideas that get lost because they weren’t written down.  If I didn’t know any better, I’d swear he was following me around. 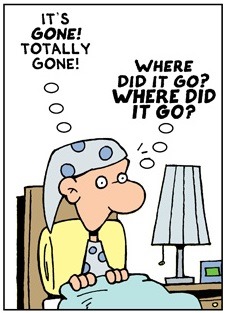 (Click the panel for the full Dork Tower comic.)

I’m sure, for the next couple of days, I’ll struggle to remember what the post was about.  Whether I recall it or not, I don’t know.  All I do know is that, the next time I get a blog post idea, I’m writing it down!

NOTE: The "light bulb" image above is by mystica and is available from OpenClipArt.org.  I modified it by adding a question mark.