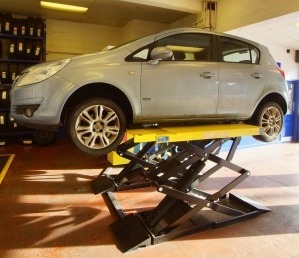 For awhile now, my car has been making noises.  When I drove, I’d hear a rumbling noise coming from the back of the car.  We figured that something was wrong with the muffler and I meant to get it looked at, but – life being what it is – other things kept coming up and delaying this getting fixed.  That all changed on Friday.

After picking NHL up from school, we started driving to get JSL.  Right away, we knew something was wrong.  The low rumbling noise – that usually was almost completely blocked by rolling the windows up – was replaced by a much louder noise.  It sounded like we were driving a motorboat down the street.  In addition to this, our car sounded like it was dragging something and there were occasional popping sounds.  Furthermore, the back of the car began to vibrate.  All of this noise was too much for sound-sensitive NHL and he began to have a panic attack.  (It didn’t help that B and I were freaking out over what was wrong.)

When we parked by JSL’s school, I had B keep the car on while I knelt down to take a look under the car.  I immediately saw what was wrong.  I saw the exhaust pipe vibrating freely, completely in time with the sounds we were hearing.

Noticing this was smart – what came next wasn’t.

For some reason, I got the idea to try to hold the pipe still to see if this stopped the noise.  Without thinking, I reached my hand under the car and touched the pipe.

Now, you might be thinking that the workings under a car can get hot.  If so, you’d be right.  Boy, are you right.  My fingers barely touched the pipe when I felt the burn and withdrew them quickly.  Still, three of my fingers hurt like crazy and I saw a big blister forming on one of them.  We picked the boys up and then, after dropping the kids and B at home, I took the car into a local service station to get it repaired.  I conveniently forgot to mention the part about me burning my hands under the hot, running car.

Sure enough, my diagnosis was correct.  The exhaust pipe had separated from the muffler.  Both needed to be replaced.  A few hours (and quite a few hundred dollars) later, and my car was all fixed.  Now we keep hearing weird noises, but I think we’re just a) used to weird sounds coming from my car and b) expecting something else to go wrong.  As for my fingers, they’ve healed pretty quickly.

In all my years of supporting computer systems, I’ve learned one valuable lesson: Never treat people like idiots for not knowing something or for doing something stupid.  After all, everyone starts out not knowing what you take to be basic knowledge and all it takes is one moment when your brain overlooks the obvious (car undercarriages are hot when they are running) for you to do something stupid.

NOTE: The "KwikFit" image above is by Jusben and is available via morgueFile.