Do As I Say Not As I Do: Bad Habit Edition 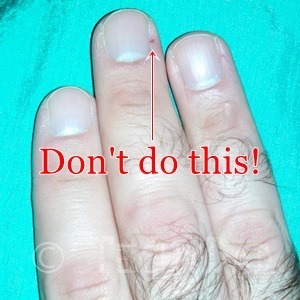 When you’re on the Internet, it can be easy to hide your bad habits. A photo of food is never accompanied by a video of the person chewing it with their mouth open.  Selfies rarely show the person reaching in their nose to "scratch the inside."  Pictures of your house don’t show the stack of papers that’s been sitting since 2008 but that you’re definitely going to clean up this weekend.  In short, the Internet makes it easy for people to put forth idealized version of themselves.  It makes it easy to look at someone online and think that they are perfect.

What isn’t often discussed are our bad habits.  We all have them.  I’m definitely no exception.  I know of plenty and I’m sure there are plenty of annoying things that I do without knowing it.  NHL, unfortunately, seems to have picked up on one of my bad habits.  And I mean "picked" literally.

For the longest time, whenever I was stressed or found myself with nothing to do, my attention would turn to the cuticles and skin surrounding my fingers.  I’d see the usual assortment of tiny pieces of skin that virtually everyone has.  Most people would ignore these – they don’t hurt and if you leave them alone, they tend to just go away.  I wouldn’t though.  I’d pick at them to try to get them "looking right."  All too often, I’d pick so much that I’d wind up bleeding.  If I got the urge to pick my nails and tried not doing it, either by attempting to ignore the urge or by sitting on my hands, I’d just feel more and more compelled to do it until I gave in.  My father kept warning me not to do it, but I just couldn’t stop.  It was as if a powerful force were pulling me to do this against my will.

As I grew up, I learned to hold off on my picking, but the habit never fully went away.  I even resorted to keeping a small pair of scissors or a cuticle trimmer with me since these could make a cleaner cut (and thus not have a risk of bleeding) over picking it myself.

Lately, I’ve noticed a disturbing trend.  NHL has been picking his nails also.  I’ve tried to give NHL alternatives to picking.  If he feels the urge to pick his nails, I told him to, instead, press along the edge of the nail instead.  This will give the sensory input that will help quell the urge without the risk of bleeding.  Unfortunately, for all my warnings and recommendations, NHL steadfastly continues these actions.  Now I know how my father felt all those years ago.

I’ll continue to try to help NHL break his bad habit, but perhaps there are just some things that are out of a parent’s control.