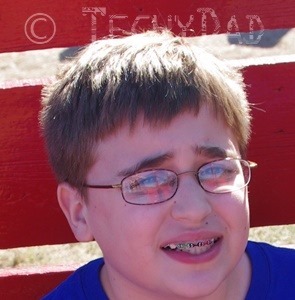 For the past 15 months, we’ve been dealing with a oral metal situation.  In short, NHL has had braces for the past 15 months.  This has meant needing to take care what NHL ate, how often he brushed his teeth, and all-too-frequent trips to the orthodontist to check out his mouth gear.  That last one definitely wasn’t cheap.

NHL has been great throughout this.  He has helped take care of his braces quite well.  He would protest when given food that he wasn’t allowed to eat – even if it was food that he really wanted to eat.  Though he would often fight over the nighttime tooth care routine, this was more a function of him being tired than not understanding the importance.

It was amazing how smoothly the braces time went.  Other than some brackets popping off due to baby teeth coming loose, we have only had one major incident.  A couple of weeks ago, NHL was complaining that his mouth was hurting.  When we looked in, we noticed that his wire had popped out.  As this was at 8:30pm on a Friday night, we couldn’t just stop by the office to get it fixed.  No, we needed to make an emergency call, drop a tired JSL off at B’s parents, and then drive out to the orthodontist’s office.  The orthodontist was nice enough to meet us there and replace NHL’s wire with a nice, strong steel one that he said wouldn’t pop off like this.

"This will never break" ranks right up there with "What’s the worst that can happen" in things that should never be said.  The next morning, NHL came into our room to tell us that his new wire had broken.  It turned out that the bracket had somehow released the wire.  Luckily, NHL was able to prop the wire on the bracket until Monday when he already had an appointment scheduled.

But today all this ends.  NHL will get his braces removed and will get a nice, new retainer to wear.  He’ll still need to take care of his teeth, of course, but at least his food restrictions will ease up.  He’s looking forward to enjoying gum, hard tacos, chips, pizza crust, bagels, popcorn, and many other foods that were denied him these past fifteen months.  I’ve got to admit that I’m happy that he’s getting his braces off too.  It’s hard enough cooking for us plus a picky JSL.  Adding in an NHL who isn’t picky but who can’t eat certain foods made things even more complicated.

Now, here’s hoping that the retainer does its job well enough that a second round of braces won’t be needed.