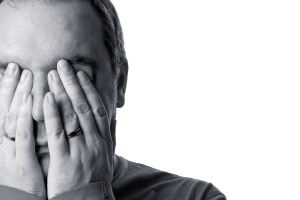 When I was younger, I would often berate myself for what I perceived as social failings.  If I said the wrong thing or did something slightly wrong, I’d mentally exaggerate how bad it was and berate myself for days. Given this and the bullying I endured on a daily basis, my anxiety over social situations was quite high.  Over the years, the bullying went away and I learned to stop dwelling on mistakes and instead to learn from and move on.  This doesn’t mean that I’m anxiety-free, however.

A few months ago, while recovering from surgery, I suffered an anxiety attack.  I woke up at 2am and couldn’t get back to sleep.  Every time I felt myself nearing sleep, my anxiety levels would rise and I’d be wide awake.  I couldn’t even stay in bed.  My entire body felt on edge.  I was uncomfortable in my own skin and I felt like I needed to run around the house.  Obviously not an option at two in the morning.

The next night, I was ready for a good night’s sleep, but as I got ready for bed, my anxiety levels started to rise.  I kept remembering the feeling of the anxiety attack the previous night and the mere memory of it threatened to cause a repeat performance.  Luckily, I was able to get to sleep and show myself that this wasn’t going to become a nightly occurrence.

A couple of nights ago, JSL wasn’t sleeping well.  Every time we got him to sleep, he would wake up an hour or so later.  When he finally went to sleep for the final time that night, we thought we could finally get to sleep.  Then, out of nowhere and for no apparent reason, my anxiety levels skyrocketed.  The blankets on me felt like they were suffocating me.  The sweatshirt I was wearing felt like it was compressing my chest.  I sat up, walked into the living room and tried to calm down, but I couldn’t.  I tried watching TV, but it didn’t help.  Neither did playing games on my phone.  Eventually, the feeling passed enough for me to get some sleep.

The next day, I felt a constant level of anxiety.  I felt on edge like the anxiety attack would reoccur at any moment.  Talking about it or tweeting about it only seemed to fuel the anxiety.  I dreaded going to bed that night wondering if a full blown attack would make a return appearance.  I even went out of my way to not read my usual RSS feeds in case I needed something to do at 2am.  Thankfully, I went to sleep, slept the entire night, and the anxiety attack didn’t come back.  The next day my anxiety levels seemed much lower.

Still, though, it feels like the threat of another attack is close by.  I don’t know what triggered this one and so don’t know what to watch out for.  Was it something I ate?  Stress that I was feeling but didn’t quite consciously realize?  Or was something else entirely to blame.  Perhaps worst of all, maybe there was no direct cause.  Nothing that could have been avoided.  Maybe these things will just happen at random and there isn’t anything I can do to stop them.

Have you ever had an anxiety attack?  How did you deal with it or with the threat of it reoccurring?

NOTE: The "hide face" image above is by hotblack and is freely available from morgueFile.