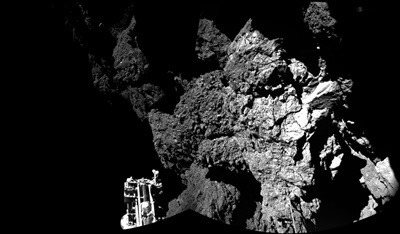 Over the past ten years, a small craft named Rosetta has been travelling through the cold, dark reaches of space.  It swung past Earth three times and Mars once before it reached its destination: Comet 67P.  In early August, Rosetta performed an extremely tricky feat.  It entered into orbit around the comet.  You might think that this shouldn’t be too hard, but comets aren’t very massive.  Too much thrust one way or another and Rosetta would have gone tumbling away from the comet and into space.  Two days ago, though, Rosetta topped this already incredible achievement.  It detached a lander – Philae – which descended to the comet’s surface making it the first craft ever to land on a comet.  (There was a mission called Deep Impact which "landed" something on a comet, but that was a chunk of copper which was purposefully impacted with the comet to examine the result.)

The landing didn’t go perfectly.  Philae was supposed to touch down, deploy a harpoon to reel itself in, and then use ice drills to secure itself into place.  Instead, the harpoon didn’t fire and Philae bounced. Twice.  It landed on its side near a cliff.

Still, this is amazing.  This comet is 317 million miles from Earth.  At that distance, communication between the lander and Earth takes 28 minutes.  This meant that mission control couldn’t steer the lander itself.  Imagine trying to drive a car if there was a 28 minute delay between pushing on the brakes, turning the wheel, or hitting the gas and that action actually happening.  This meant that the lander had to land itself without any help from anybody.  This is a robot that we build landing on a comet.

This amazing feat just blows my mind.  To think that not that long ago, mankind thought of comets as evil, supernatural omens.  Now we have the technological capability to launch a spacecraft, fly by planets multiple times, enter into orbit with, and then land on a comet.  I feel like Benny from The Lego Movie.  Only instead of shouting "SPACESHIP!", I want to run around shouting "ROBOT ON A COMET!!!"

Just to close, it gets even better, "robot on a comet" has sent back photos of said comet.

Those rocks that we here on Earth are seeing are over 300 million miles away and are a window into how the solar system looked billions of years ago.  Sometimes, you just have to sit back and be amazed by what we are capable of, technologically.