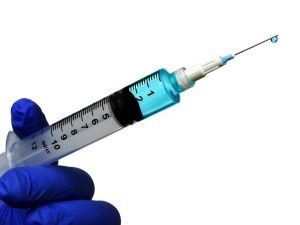 There’s a great debate going on in our society today over vaccination.  Some say that everyone should be vaccinated.  They point to evidence showing how vaccines prevent disease and how they are much safer than the diseases they prevent.  Others, claim that vaccines are filled with "toxins" and sometimes even raise questions about whether vaccines cause Autism.  Unfortunately, in this debate, there are some big losers: Children too young to vaccinate, people whose vaccines didn’t "take", or people with valid medical reasons not to vaccinate (for example, immune system disorders).

This "debate" has been going on ever since Andrew Wakefield published his report implicating the MMR vaccine in the development of Autism.  Unfortunately for Wakefield, his research was debunked repeatedly, shown to be an outright fraud (he not only manipulated results and took unethical steps to gather "data", but was attempting to discredit the MMR vaccine so he could market his own replacement), and his medical license was stripped from him.  Unfortunately for the rest of us, some people still hail him as a hero and decided that this debunking/license-stripping was just a witch hunt by "Big Pharma" and its supporters in retribution for telling the truth.  As the anti-vaccination crowd gained followers, outbreaks of diseases all-but-defeated started flaring up.

The debate really heated up a month ago when the public was warned that someone infected with measles visited Disneyland between December 15th and 20th.  As a result, nine people were infected.  Eight of those nine were not vaccinated.  As the days passed, the number of cases tied to the Disneyland outbreak rose to 50.  Now, they’ve topped 100.  Some of the workers at Disneyland came down with measles and Disney considered mandating vaccinations as a condition of employment.  Some people lauded this decision and some decried it as an unneeded imposition on a person’s right to choose what happens to their body.

After this, some politicians decided to voice their opposition to mandatory vaccination.  Rand Paul was notable for saying he has heard of "many tragic cases of walking, talking normal children who wound up with profound mental disorders after vaccines."  Though he didn’t come out and say it, the implication was clear.  Rand Paul was saying that vaccinating your child could lead to Autism – the major "mental disorder" that some people think is caused by vaccines.  (Autism isn’t a mental disorder, but that’s a completely different discussion.  Suffice it to say that many people think of it as one even though it isn’t.)

Finally, there was a decision from Autism Speaks.  We love supporting causes related to Autism.  Given that my son is diagnosed with Asperger’s and I’m likely an undiagnosed Aspie, it’s a cause that’s close to my heart.  However, we couldn’t, in good conscience, support Autism Speaks, because they kept supporting the notion that vaccines cause autism.  Though they encouraged vaccination on their FAQ page, they always kept wording stating that it was still possible that vaccines and autism were linked.  I was very happy to hear that Autism Speaks had come out in support of vaccinations.  There is no more quibbling or "in rare cases" loophole-wording on their website.  Instead, it’s a simple statement: "Vaccines do not cause autism.  We urge that all children be fully vaccinated."

How did we get to this point?

In a way, vaccines were a victim of their own success.  When previous generations grew up, many diseases that are now vaccine preventable were instead prevalent.  People then not only knew other people who had come down with measles, mumps, rubella, polio, whooping cough, and other diseases, but lived in fear that they or their children would be next.  Vaccines eliminated that fear.  Unfortunately, as generations pass, people with first hand knowledge of how bad these diseases are dwindle.  I myself have never seen someone with measles and only know of the horrors by reading of it.  As terrible as the accounts sound, I’m sure living it was much worse.

As the diseases faded into obscurity, the threat they seemed to possess lightened.  The horrors of weeks of coughing that prevent the person from breathing or result in vomiting were replaced with the idea that "it’s just some coughing – no big deal."  The dangers and side effects of measles (deafness, pneumonia, encephalitis, brain damage, or death to name a few) were reduced in people’s minds to "you get sick with some spots for a week and then you’re all better."  With this minimized threat in mind, the stage was set to question whether the vaccines were really needed at all and scare tactics about ingredients or disease links could take hold.

Even after all of this, though, I might agree that vaccinating your children is a personal choice if not for one simple fact: A person who decides not to vaccinate their child affects more than just their child.  If it was only a matter of opening your child to preventable diseases, I’d argue that people should vaccinate, but shouldn’t be required to.  If someone doesn’t feed their child healthy food and instead relies on a steady diet of junk food, I might argue against their choices but I’d never say they should be compelled to serve broccoli at every meal.  This is because one child’s bad eating habits don’t result in other children suddenly gaining weight.  However, when someone doesn’t vaccinate, they open the door for other people to be infected – for example, infants too young to be vaccinated or people with medical conditions that preclude vaccination.  This turns it from a "individual liberty" issue to a "community health" issue.

To those who might argue that it still comes down to individual liberty, I’d give one simple answer: Typhoid Mary.  Mary Mallon had a problem.  Every where she went, she would find work as a cook until a typhoid outbreak occurred.  Then, she would leave town quickly, setting up shop somewhere else.  Eventually, it was discovered that she was a carrier for typhoid.  She carried the disease, but didn’t get sick from it.  Unfortunately, the people whose food she prepared weren’t so lucky.  She was held in custody and told she could go if she didn’t cook for people again.  She initially refused to agree to this or even to take basic steps to improve her hygiene, but finally she agreed to the terms and was released.  It didn’t take long before she began cooking again under an assumed name and not long after that more people got sick.  Two people died as a result.  Mary was again taken into custody, but this time she remained in custody for the rest of her life.

Some people might decry the government for infringing on her right to life, liberty, and the pursuit of happiness (her chosen career of cooking), but the problem with this argument is that rights have limits.  The common expression is "Your right to swing your fist ends at my face."  One cannot simply do as one likes, ignoring all consequences, and chalk it up to "rights."  Just as with Typhoid Mary, people who don’t vaccinate puts others at risk.  In the case of Typhoid Mary, it was by direct infection.  In the case of people who don’t vaccinate (for other than valid medical reasons), it is because they weaken herd immunity.

A quick aside for people who don’t know what "herd immunity" is.  Diseases spread from person to person.  They survive not by killing their hosts, but by keeping the host long enough to spread them to as many people as possible.  With the natural immunity that people obtained from surviving the diseases, there was a group of people that the diseases couldn’t cling to.  Unfortunately, this number was too low to impede the spread of the disease.  In addition, contracting the diseases might mean you’d get the immunity, but you would also risk horrible side effects or even death.  With vaccination, the number of people with immunity climbed to such an extant that diseases found it impossible to find someone to use as a ride.  With their paths to spread limited, the diseases were held back or even (in the case of smallpox) eliminated.

Herd immunity protects those who can’t be vaccinated due to age or illness.  It also protected in case someone’s vaccine didn’t take.  (Vaccines aren’t 100% protection.  Even 99.99% protection means that a lot of people will get the shot but could still get sick.)  When the first anti-vax folks decided not to vaccinate, their kids didn’t get sick because of herd immunity as well.  Herd immunity was able to withstand a few people not getting protected.  As the numbers spread, though, new paths opened up for the diseases.  They found themselves able to spread to more people again.  Thus, we get a resurgence in measles, whooping cough, and other vaccine-preventable diseases.

And here we come to the consequence portion.  When someone chooses not to vaccinate, they not only make a decision that affects their own child, but they make one that opens thousands of other people to possible harm.  Not vaccinating is not only listening to bad advice (vaccines have proven their effectiveness many times over) and is not only bad risk assessment (the risks of vaccines are minimal and the risks of the diseases they prevent are immense), but it is putting others in harms way in the name of exercising your own liberty.  I wouldn’t condone someone driving drunk because "they should be allowed to drive however they like" because doing so puts more than the drunk driver in danger.  Similarly, not vaccinating puts many other people at risk – as the Disneyland outbreak demonstrates.  Sadly, it might take a high profile outbreak like this to give some people some perspective.

As a parent and as a human being, I urge parents to vaccinate their children.  If you have concerns, talk with your doctor.  Don’t listen to celebrities or people whose research was shown to be a fraud.  Don’t listen to people who talk about "toxins" like formaldehyde in vaccines (you get more by eating a single apple) or who rant about "Big Pharma."  Talk to a trained medical professional to get the real story and then make sure your child gets vaccinated.  Don’t let the diseases spread.  Don’t let more people get sick and die.  Let’s get herd immunity working again so more diseases can join smallpox and be eliminated for good.

NOTE: The "needle" image above is by DodgertonSkillhause and is available via morgueFile.