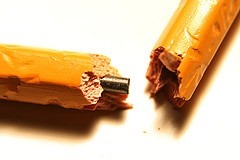 Last month, Governor Cuomo pushed out his fifth on-time New York State budget.  During the vote, Democrat after Democrat stood up saying how horrible the budget was, particularly the education piece, yet one after another they voted for it.  They would all temper their yes vote "with a heavy heart" – a phrase that multiple people used so much back to back that it seemed almost coached as a result of political pressure .  "We know you hate this but if you want anything for your district next year, you’ll vote yes.  You can express your disapproval by saying ‘with a heavy heart.’  That’s acceptable, but vote no and your funds will dry up until you’re voted out."  Passing the budget on time (and avoiding any embarrassment that the governor might face with a late budget) took precedent over the actual budget contents.

What was so bad about the education component of the budget?  One word:  Testing.  I’ve been pretty vocal about opposing Common Core, specifically New York State’s implementation of it and the high stakes testing that results.  This budget doesn’t address any of the issues opponents of the testing regime had.  Instead, it doubles down on testing, making it part of a teacher’s evaluations.

Before this budget, most of a teacher’s evaluations came from observations by local administrators.  You know, the people who would know that teacher and his/her students the best.  Now, 50% of the evaluations come from testing.  Students will be tested in the beginning and end of the year.  If their scores don’t improve by an amount set by State Ed (after the test scores are in, mind you), the teacher will be said to have failed this portion of the testing.  It doesn’t matter if the student gets a 94% on the beginning of the year test.  If State Ed says that the students need to improve by 6 percentage points and the student gets a 99%, the teacher is a failure.  The other 50% of the teacher’s evaluation will come from a combination of local observation and from an outside observer.  Note that this observer doesn’t need to be an educator at all.  This is akin to having a plumber rate your surgeon.  After all, the former is a licensed professional, right?  So he should be able to accurately say how well your surgeon can remove an appendix.

The teacher’s evaluation score can be "ineffective", "developing", "effective", and "highly effective."  If the students don’t do well on the exams, the teacher can’t receive an "effective" or "highly effective" rating.  Not even if both observations show that the teacher is wonderful.  Instead, they must hope to get a "developing" rating.  If a teacher gets an "ineffective" rating for two years in a row, they can be charged with incompetence within 90 days.  If they get a third ineffective rating, they MUST be charged with incompetence within 30 days.  In the latter case, a teacher’s only defense will be fraud.  A teacher of special needs students can’t bring up that his kids don’t deal well with tests but that he actually inspires the kids to learn.  Instead, he’ll be declared incompetent.  The teacher of the advanced class won’t be allowed to point out that her kids simply don’t have the room to increase their previous scores like State Ed has mandated.  She’ll be kicked out for being incompetent.  Job security for a teacher will now mean that they might be three years from being booted from the profession.  After all, what school will hire a teacher who was fired for being incompetent?  (Even if "incompetent" really means "students didn’t test as well as State Ed said they needed to test.")

At this point, you might think "at least it can’t get any worse."  If you’re thinking that, then you don’t know Andrew Cuomo too well.  In 2013, Cuomo called for a "death penalty" for public schools that failed based on test scores.  Now, he’s enacted this in the form of receivership.  If a school falls within the bottom 5 percent of state test scores for three years, they’ll be declared a "failing school."  They will then have two years to turn this situation around.  If they haven’t (to State Ed’s satisfaction), a person or company can be assigned control of the school.  This receiver can even fire teachers and administrators and declare that the school will become a charter school.

Since all of these changes seem to center around students tests, you might start to wonder what’s so wrong with the tests.  After all, teachers give tests all the time.  won’t these tests just show how much students are learning?

The answer is that they won’t.  The first problem is that the tests are completely non-transparent.  Pearson writes the tests, gags students and teachers from speaking about the tests, grades the tests, and returns the students’ scores without showing what the student got right and what he/she got wrong.  Proponents of the tests say they will give us important information about how well our students are doing but how can you measure anything without detailed information about what the kids got right and wrong?  Suppose you asked how deep a hole was and I answered "42."  Do I mean inches?  Feet?  Miles?  Kilometers?  Maybe I mean that the hole is so deep that 42 people would need to stand on each others’ shoulders to reach the top.  Perhaps I mean that a ladder would need 42 rungs to reach the top.  It’s possible that I mean that it would take 42 seconds to reach the top when travelling at a specific speed (which I refused to divulge).  Without detail, that number means nothing.

It should be noted that last year, they were forced to release half of the questions that were on the test due to public outcry.  There is no guarantee that they will release any questions this year.  Even if they do, that doesn’t tell us how a student did.  If two students have same final score, it doesn’t mean that they are lacking in the same areas.  Without detailed information (see above), the numbers are meaningless.

Despite this gag order, some have been leaking test questions on social media and blogs.  In the case of teachers, this is usually done anonymously since attaching your name to this would mean immediate termination.  Students, though, have tweeted test questions after the fact.  When they do so, Pearson has been known to contact school districts about "security breaches" sometimes overstating the events so it seems as though the students’ actions are worse than they really are.  Here’s the problem with Pearson’s "gag order" on students.  For a company to order someone not to divulge information, they will usually have you sign a non-disclosure agreement (NDA).  The incentive to sign might be for employment, a peek into what they are developing (e.g. so you can make something compatible with their upcoming device), or to explore joint ventures with the company.  In each case, the person signing the NDA gets something in return for their silence.  The NDA is also voluntary.  Suppose I was seeking a job and my potential employer wanted me to sign an NDA.  I could refuse to do so knowing that this meant I wouldn’t by employed by that company.  It would be my choice.

What about students, though?  Students are too young to enter into contractual agreements.  Students can’t willingly sign contracts – at least not without the approval of their parents/guardians – because they are minors.  Without their voluntary agreement, Pearson can’t claim that students are breaking an NDA by revealing test information.  I’ll agree that a student taking a camera and tweeting photos of the test during the testing is breaking the rules.  However, once the student leaves the school, Pearson can’t dictate what he/she says or does on social media.  If a student tweets out a test question purely from memory, there’s nothing Pearson can do about it.

With all of this testing, what happens to education?  If it were just a day of tests and done, it might not be a big waste of time.  However, a total of 8 days are being spent on this round of testing.  Before that, many days are devoted to test preparation.  If teachers actually try to educate their students instead of preparing them for the tests, they run the risk of their students doing poorly, being assigned an "ineffective" rating, and being kicked out of the teaching profession.  So teachers must gear all of their lessons around the tests.  Real education is taking a back seat to filling in bubbles.  Not that I blame the teachers, mind you.  They are caught between a love for educating their students and their desire to stay employed.  It’s the politicians who crafted these rules who are to blame.

And now, finally, we get to the reaction.  Two years ago, we opted our older child out of the high stakes tests.  We were one of a very small number who did in our district.  Last year, the numbers rose quite a bit and our older child again opted out.  This year, he opted out for a third time and the numbers have soared.  (Our youngest will hit his first high stakes tests next year and will opt out.)  Parents, students, and teachers are uniting against this testing regime and saying that they won’t allow their kids to be abused in this manner.  In some districts, notably on Long Island, over 50% of students opted out.  The totals state wide aren’t in yet, but look to top 200,000.  They might even be 300,000.  (This is out of 1.1 million students.)

Now, some principals – pressured by state ed to reduce opt out numbers – will send a letter saying that they could lose funding for their school if they fall below 95% of kids being tested.  We were warned this too.  However, this isn’t true at all.  Not one school has had funding revoked for too much opting out.  In fact, with the number of students opting out growing, state ed would need to defund way too many schools.  I’d actually like to see them try to carry out this threat.  The surge of angry parents would be something to see.

The other lie that will be told is that your child doesn’t have the option to opt out.  Or that your child must express this verbally to the test proctor on the day of the test.  Or that your child must at least write his/her name on the test booklet.  All of these are falsehoods as well.  A child who opts out is given a "score" of 999.  A child can opt out via a parental letter at any time (even on the first day of the school year – though you should remind administrators closer to testing time).  And a child should NOT write on any testing booklet given to them.  Even marking it a small bit will cause that booklet to be counted.  Other districts will threaten students who opt out with loss of ability to participate in after school activities or honors programs or will say that these kids can opt out but must "sit and stare" and cannot do other work/reading (even if they are quiet).  These are all scare tactics designed to force kids into taking the tests.  If you encounter this, contact NYSAPE.  They can put you in touch with local advocates to help counter these threats.

I can’t help but smile as I see the reports of more and more opt outs across the state.  The more parents, students, and teachers who speak up, the more the pressure will be put on politicians to do away with high stakes testing and to get some sanity back into public education.

NOTE: The image above, titled "Frustration" is by Eric and is available under a Creative Commons Attribution-NoDerivs 2.0 Generic license via Flickr.