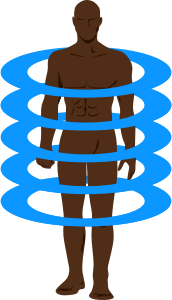 In my Extreme Geekery series, I often focus on some scenario that requires science and math to solve. Given my love for science fiction, though, I also love imagining scenarios when science and technology ARE the problem and society needs to figure out the solution.  When the telephone gained popularity, there was a shift in communication abilities.  No longer did you need to wait for weeks for a letter to arrive at its destination.  Conversations across great distances could be accomplished in real-time instead of over months.  With the Internet, this was greatly amplified.  Now, someone in the United States could communicate with someone next door just the same as if they were half a world away.  Businesses could also sell to people even if those people didn’t live anywhere near the shop.  In fact, the Internet revolution had such an impact, that many stores don’t even have a physical shop.  While there was an equivalent pre-Internet in catalog sales, the Internet took this phenomenon to the next level.  Societal shifts of this nature can create many more opportunities for people and businesses, but they can also destroy the old ways.

My question now is: What would happen if we developed instant transportation.

For the sake of this thought experiment, we won’t bother with the "how" of the teleportation.  Let’s just assume that there is a new smartphone application that can teleport you (and your family/luggage) from where you currently are to any place you want to go.  You select where you want to go on a map, click a button, and there you are.  We’ll assume that the transportation method is safe, effective, easy for anyone to use without incident (i.e. not so hard that someone selects "the mall" and winds up 100 feet above the mall plummeting to their death), and inexpensive enough so that pretty much everyone can teleport.  What would happen with society?  Would this be a boon or the beginning of the end?

The obvious casualty of this technology would be the transportation industry.  Why would you get on an airplane – dealing with security, baggage fees, cramped seats, and tiny bags of peanuts – when you could just click and be at your destination?  Airlines and trains would go out of business as people teleported to their destination the same way that people sent less letters via snail mail once e-mail was widely used.  Obviously, there would be some people who still used the slow mode of transport.  Perhaps they liked the trip or perhaps they didn’t trust the new technology.  In any event, the companies might not go completely out of business, but they would need to radically change their service.  Perhaps the availability of instant travel would usher the return of 1950’s style airplane rides.  When it came to shipping goods, companies like FedEx might ditch the fleet of planes and trucks.  Instead, a carrier would pick up your package, zap himself to your house to drop it off, and then zap back for the next package.  Ordering online could mean getting your items in a matter of hours instead of days.

With instantaneous teleportation, tourism would increase dramatically.  Want to vacation in Disney World?  Just zap yourself there.  Get the urge to spend an evening in Hawaii?  You’re there.  Get the urge to visit Australia?  Urge satisfied.  You might think that, despite the increased travel, hotels would suffer.  After all, why stay someone else when you could just zap yourself home and sleep in your own bed?  Then again, at home there might be dirty dishes in the sink, a rug that needs vacuuming, sheets that need cleaning, and garbage that needs to be taken out.  If you are going to have some vacation time, why not get away from those chores and let the hotel staff take care of the room for you?  Vacations might wind up taking two forms.  For the quick pop out – for example to have lunch in a nice little restaurant in Italy before getting back to work in New York – you wouldn’t book a hotel stay.  However, if you were planning to get away from it all for awhile, a hotel would definitely get your business.  (Though, forgetting something at home would just mean a quick teleport home to retrieve it.)

A Walk On The Shady Side

While instant travel would make many people’s lives easier, it would have a dark side as well.  Right now, borders are more or less controlled.  If you want to enter or leave a country, you need a passport and you need to pass through the country’s security checks.  With instant travel, a person could just zap themselves deep within the country for whatever reason good or bad.  Criminals sent to jail could have a conspirator on the outsize teleport in, grab them, and teleport back out with them.  Imprisoning lawbreakers would quickly become an ineffective means of punishment.  For that matter, criminals could teleport into a house, grab whatever they want, and then teleport away.  Far, far away.  Burglaries would be impossible to prevent.

Finally, though perhaps least serious, charging admission fees would become obsolete.  Take Walt Disney World for example.  Suppose you want to visit the Small World ride in the Magic Kingdom.  First, you need to purchase an admission ticket.  This ticket is checked before you get into the park.  Once inside, you can go on rides like Small World.  With instant teleportation, though, you could just appear inside the gates, go on the ride, and then teleport back home.  No ticket required.

All of this would quickly mean that laws would be passed requiring teleportation blocks of some kind.  Disney World might block teleportation within their parks from outside the parks.  So you could teleport from Small World to Space Mountain, but not from the parking lot to Big Thunder Mountain.  Furthermore, laws might be passed to limit teleportation liabilities.  Right now, if someone falls in a building, the building’s owner might be sued.  What would happen, though, if you teleported to the top of the Castle in the Magic Kingdom and wound up falling to the bottom?  Would your family be able to sue Disney for not limiting teleportation enough?  Or would lawsuit-shy executives make sure that there were only preset teleportation points for people to use?

Instant teleportation would also be a huge pain for celebrities. Paparazzi wouldn’t need to stalk outside of a celebrity’s compound, but could teleport right inside to take photos of them in their most private moments. Furthermore, overenthusiastic fans would be able to see their favorite celebrities at any moment. If the hotel room that a popular band was staying in was leaked on social media, it would suddenly become packed with screaming teenagers.  For that matter, non-celebrities might find themselves beset by intruders.  Does that guy you’ve told you don’t want to see anymore keep knocking on your door?  Bad news, he can now teleport through it.  Does that ex-girlfriend not get the hint that you’re over?  Unfortunately, she can teleport herself into your bedroom any time she wants to.

Given the downsides – both to entrenched businesses and to people/businesses wishing to avoid criminal activities, the development of teleportation capabilities would likely be strictly regulated if not banned outright.  However, technology bans never seem to last in the long run.  Eventually, the technology to teleport would leak out.  For better or worse, teleportation would get out and – like with any other technology – society would need to adapt.  Children would grow up knowing only a world with teleportation.  Elders would remember the "good old days" before people could teleport, but would eventually be replaced in positions of power by people who accepted teleportation as a fact of life.  Before long, mankind wouldn’t be able to conceive of not teleporting the same way that people nowadays can’t imagine not being able to drive where they want to go.

NOTE: The "Teleporter" image above is by qubodup and is available via OpenClipArt.org.