Lessons From A Little Rose Bush 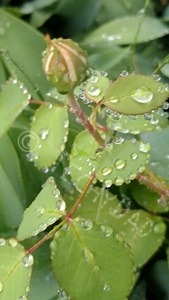 When we first moved into our house eleven years ago, there was a tiny rise bush in the front yard.  The poor thing like like it was on its last legs and we figured it wouldn’t be giving us many roses. In fact, calling it a"bush " is being generous.  It was more of a rose stalk.  Every year, we would declare that surely this works be the year that the rose bush died.  Every year, it would look like we were right…  And then a rise would bloom.  There might just one or two roses per year, but there they were declaring to the world that this rose bush wasn’t dead yet.

As we did gardening around the little rose bush, there was a temptation to just put it out of its misery.  We could easily dig it up and replace it with a plant that produced more flowers.  A new plant would have looked much better in that spot.  It would have easily produced more flowers and looked much better.  We never did, though.  I guess I just couldn’t bear to step in and end the little rose bush’s battle for life.  Eleven years on and the rose bush is still clinging to life and producing a rose or two – challenging everyone else’s notion that it should just die off.

There are plenty of moments when the stresses of life threaten to overwhelm me.  I want to just scream and run out of the room.  Other times, my Imposter Syndrome flares up.  I see others doing what I do only much better and it makes me feel like just giving up.  After all, my Imposter Syndrome whispers to me, what’s the point of even trying when so many people are so much better than I am.  Finally, there are instances when the task at hand seems impossible and I just want to quit.

Who knew that one could learn so much from a little rose bush?