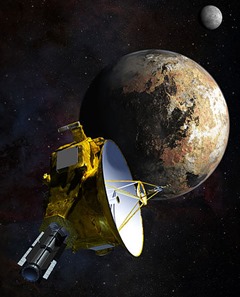 Today, New Horizons will make its closest approach to Pluto.  It has already sent us some fantastic views from the dwarf-planet-formally-known-as-the-ninth-planet and it will likely send back many more.  We’ll learn a lot from the information that New Horizons sends us.  I would be remiss to pass up this opportunity to geek out.  My first instinct would be to take the distance between Earth and Pluto and figure out how long it would take to get there via various “normal transportation” means.  Before I do that, though, it turns out that Adam Frank from NPR already did this.  As much as I’d love to do the math again, let’s flip it around.  Instead of figuring out how long it would take to drive to Pluto, let’s imagine you could get in a car that travels at 32,400 miles per hour – the speed New Horizons is moving at.  Let’s suppose you could use this car to make various journeys.  How quick would those travels be?

First, some ground rules.  We’re going to assume that there is no traffic – no sense in having a car that can go 32,400 miles per hour when there’s a line of cars stopped ahead of it.  We’re also going to assume that our can can take a straight line path without crashing.  Personally, I’ve driven at 80 miles per hour and felt like I was beginning to lose control.  I couldn’t imagine how out of control 32,400 would feel.  Not crashing also means being able to go from 32,400 mph to a full stop without any occupants being injured in any way.

I’ll often get invites to events in New York City.  Sadly, I need to turn many of them down simply because it takes three hours to drive to the city from where I live.  If I had a New Horizons Car, though, I’d be able to get to New York City in under twenty seconds.  At that travel time, I could order a pizza from a New York City pizzeria and get there before they even began preparing my order.  Maybe we need something a bit father away to drive to.

It’s no secret that I’m a Disney fan.  I’ve been in love with Disney World since B and I went there on our honeymoon I’ve loved it even more when we went there with the kids.  Obviously, living in Upstate New York means that I can’t just stop by the Magic Kingdom.  What if I had a New Horizons Car, though.  Rounding up to the nearest 50 miles, it’s 1,250 miles to Disney World for me.  With our space-age car, I could get the family to see Mickey in two minutes and twenty seconds.   With that travel time, we wouldn’t even need the boys to bring any books to keep themselves occupied.

We have some family on the opposite coast that we rarely get the chance to see.  We’d love to see them more often, but cross-country flights are expensive.  Driving cross-country would be out totally, but now we have a bright, shiny New Horizons car in the driveway.  At about 2,850 miles to Los Angeles (rounding up to the nearest 50 again), it would take less than five and a half minutes to get to LA.

Let’s push the limits a bit more.  Since the continental United States seems so small for New Horizons Car, what about something on a bit more global a scale.  How long would it take to drive to Hong Kong?  (We’ll assume we can somehow drive on water while maintaining the speed.)  Hong Kong is about 7,950 miles away which would mean New Horizons Car could get there in under fifteen minutes.  Yes, I could travel from my house to Hong Kong and back in the time it takes for a half hour television show (including commercials) to air.

Back To New York City

Let’s do one more trip:  To New York City.  Yes, I know, we’ve done this already, but this time we’re going to take the “scenic route.”  To be specific, we would travel west around the entire world until we came back around to New York City.  Essentially, this would be circumnavigating the world so I’d need to know the circumference of the Earth at New York City’s latitude.  Luckily, this website lists all of these so it was trivial to find out that I would need to travel 30,741.789 kilometers or 19,102 miles.  At New Horizon speeds, this would take just over 35 minutes.

Given how mind-bogglingly big space is, it’s easy to forget how fast these craft are traveling at.  Were we to apply these speeds to our daily modes of travel, our world would shrink dramatically.  We would be able to go anywhere on the globe in a matter of seconds.  While I might not have a car that could take me to Disney World before a microwave meal completes, I will enjoy all of the images that New Horizons sends back as it passes Pluto on its journey deep into space.

NOTE: The New Horizons image above is comes from NASA via Wikipedia and is in the public domain.