The End Of A Couch Era 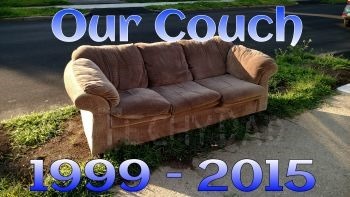 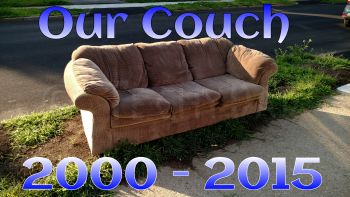 Last night, we put our couch on the curb to be taken away.  This might not seem like too huge a step.  People get rid of furniture every day, right?  This couch was the first thing B and I bought together, though.  It has lasted for 16 years.  There were many late nights spent watching TV and movies on the couch.  The boys went from babies being posed on the couch to kids playing on it.  The couch was a central figure in many of our home activities.  Now, as I write this, it is sitting outside in the dark, cool night waiting for the garbage men to haul it away.

Part of me wants to rush out and drag it back in.  To permanently affix it to the floor so that it will never leave us.  We can’t keep it, though.  Over the years, the springs in the couch have broken and fixing it would cost too much.  We lived with it in this manner for many years, but we finally purchased a new couch.  Besides, dragging the couch back in would be too difficult for me to do on my own.

Still, after we put the couch on the curb, we had the boys come out to say goodbye to it in their own way.  I took quite a few photos and videos of them having one last fun time on the couch.  Then, something magical happened.  Google messaged me to let me know that it had created a movie out of my photos/videos.  It was so perfect, I just had to share it.

Farewell, couch.  You might be leaving our lives, but we won’t soon forget you.  Thank you for all the wonderful memories.