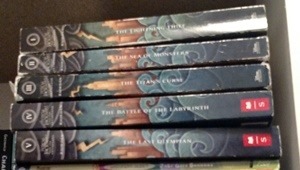 I have a bit of a book problem.

When we were preparing to go on our cruise, one of the things we packed were some books to read.  I pictured leisurely days spent sitting by the pool with nothing to do but read and that worried me.  However, it didn’t worry me because I hate reading.  In fact, I love it.  To me, there is almost nothing better than losing yourself in a good book.  I have this knack for sort of melting into the book.  The entire world around me dissolves, I can’t hear anything else, and all that exists is the book.  No, what worried me was running out of reading material.

You see, I’m a quick reader.  When I’m reading something that I like, I tear through it.  When I was in school, we’d be assigned to read chapters 1 – 5 and I’d read the entire 20 chapter book.  Then, I’d have to try to remember what happened in the first five chapters so I didn’t answer questions using knowledge from chapter 9.  Often, I’d just re-read it a second time and a third time until the class caught up with me.  I’ve been known to devour whole books in a day’s time so the idea of seven days of reading time meant possibly needing a dozen books, not one or two.

The first book I chose was Nobody Gets The Girl by James Maxey.  The second one was the first book in the Percy Jackson series.  My oldest son had been reading this series and loved it.  I’ve long been a fan of Greek mythology so a series that seemed like “Harry Potter Meets Greek Myths” seemed perfect.  Unfortunately, I didn’t get much reading time during the cruise.  There was just too much to do during the cruise to sit around reading a book.  On the bus ride back, though, I poured through Nobody Gets The Girl and finished before the bus arrived at our stop.  Nearly an entire book read in about 3 hours’ time.

During Rosh Hashanah, I had some down time and was feeling bored.  I decided to read something and settled on the first Percy Jackson book.  I poured through half of it quickly and finished it up a couple of days later.  On Friday, I began book 2 and finished that up before Saturday was over.  Book 3 was a problem, though.  That’s the book my son is currently reading.  He takes that book to school to read during free times.  I didn’t want to take his copy from him or have him possibly lose my spot in the book.  B suggested taking the Kindle version out.

If you didn’t know, many libraries have deals with Amazon.  You can take Kindle versions of books out from the library and read them on your Kindle devices (or any device with the Kindle app – which is pretty much any device) as if you bought it.  The only difference is that the rented Kindle books automatically remove themselves when the book is due.  It can be quite convenient over repeated trips to the library.

B took out Book 3 and I began it on Sunday morning.  Soon, I had overtaken where NHL had read up to.  Not long after that, I finished the book.  I grabbed NHL’s physical copy of Book 4 but reading it was slow going.  There are times when I prefer physical books and times when I prefer eBooks.  This time, the eBooks just felt better to me.  B took Book 4 out of the library and asked me if she should take Book 5 out as well while she was at it.  I told her not to because Book 4 would probably take me awhile with work coming up soon.

How wrong I was.

As I write this (on Sunday night), I just read the last words on the last page of Book 4 in the Percy Jackson series.  That’s right, I’ve read 2 books in one day.  The next book is the last one in this series, but then there are five more books in a related series written by the same author.  I have a feeling that, by the time this week is done, I’ll be midway through that series.

As far as my boys go, JSL is just like me.  After a shaky start where he didn’t like reading, he has taken to reading like a son of Poseidon to water.  (Sorry, I couldn’t help putting in a Percy Jackson reference there.)  JSL rips through book series after book series.  He will complain if we go on even the shortest of car rides without a book for him to read.

NHL, on the other hand, varies when it comes to reading.  He’ll complain a lot if we tell him to read over playing video games or watching TV.  However, if there’s a book he’s interested in, he’ll rip through the entire thing at a speed that makes me proud while understanding the entire thing.  (Reading speed means nothing if there’s no comprehension to go along with it.)  I just hope that his love of reading flourishes more as he grows.

As a geek, I’ll admit to loving video entertainment.  I’ll dutifully await the next episode of a beloved television series, will stand in line for a move that I’ve been looking forward to, and will play way too many hours of video games when I have the chance.  However, my enjoyment of all of those pales in comparison to the joy I get when I open a new book, get hooked by the writing, and feel myself being pulled into the story until I look up and realize I’ve read half the book and hours have passed.  There’s just something magical about books.

Now, if you’ll excuse me, I’ve got to tear through the final book in the Percy Jackson series.