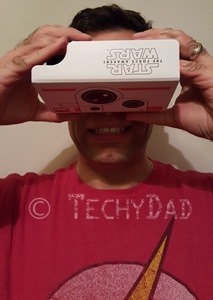 It’s no secret that our family loves Star Wars. I’ve been a Star Wars geek for as long as I can remember. Some of my first actions, upon discovering the Internet, was to join a Star Wars Usenet group.

NHL is a fan also, but JSL is a super-fan. He will often break into Yoda speak and demanded to see the film immediately after seeing the trailer back in February. (Sadly, I doubted I’d have been able to contact JJ Abrams, much less convince him to show us the movie early.

Still, our wait is almost over. We’ve been whetting our appetites with the trailers, but in two weeks the main course will arrive.

Some might fear that the new movies will repeat the mistakes that the prequels made. If Yoda taught us anything, though, it’s that fear is the Dark Side and should be avoided. Still, I’ve been secretly praying that the movie will be more Empire Strikes Back and less A Phantom Menace.

Besides the trailers, I’ve indulged my Star Wars appetite by reading some fan theories about the movies. My favorite involves the much despised character, Jar-Jar Binks.

According to the theory, Jar-Jar was originally supposed to be an evil figure hiding in plain sight. He would have been a mirror image to Yoda’s first appearance as a crazy hermit. All of his "dumb luck" moments would really have been subtle uses of the Force. The theory actually is week thought out and I could see this having been the original plan before Lucas chickened out and kept Jar-Jar as pure comic relief.

Our latest Star Wars indulgence involves a piece of cardboard. Google Cardboard, to be exact. Google Cardboard is a virtual reality headset that is made of (you guessed it) cardboard as well as lenses and Velcro.  You can ride virtual rollercoasters, travel to distant lands, and dive under the water to swim with virtual fish.

I picked up a Star Wars/Verizon Wireless branded Google Cardboard viewer on Wednesday.  After downloading the Google Cardboard app, I launched the Star Wars app.  I’ve previously used the app to take selfies of myself with Vader and Yoda.  I even got frozen in Carbonite and tried on Leia’s locks.  With Google Cardboard, however, I was able to launch the Jakko Spy feature which transported me to a desert world.  The Millennium Falcon flew right overhead pursued by two TIE fighters.  After I stopped ducking, BB-8 rolled up to deliver a message.  Needless to say, I enjoyed this immensely.  Being able to be immersed into a Star Wars planet was amazing.  The boys fought over who went next and thoroughly enjoyed their off world trips.  Even B got into the act, cheerfully saying "Oh, hello there!" as BB-8 approached her.

More Star Wars Google Cardboard features are due to be released leading up to the movie itself.  If you didn’t get a Google Cardboard from Verizon Wireless, you could always buy one from Amazon or build your own.  Either way, one thing is for sure: Star Wars excitement is just going to build more and more here until we see the new movie.  A Jedi might not crave adventure and excitement, but we’re sure looking forward to those two things on the big screen when we see The Force Awakens.