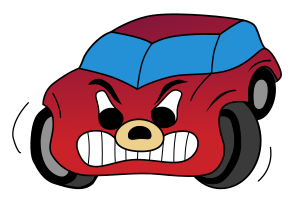 This isn’t the post I wanted to write this week, but after the weekend’s events this is the post I needed to write.

Saturday started off like such a normal day.  We had NHL with us (JSL was with B’s parents) and we were doing some shopping for needed supplies.  As we pulled into a parking lot of a local shopping center, someone pulled out of an aisle without stopping and looking and almost hit into us.  We both stopped, we honked, and some choice words may have been said.

We urged him to go on (he was already halfway into the intersection), but he signaled for us to go.  Eventually, we went on our way.

Now, if the story ended here, it wouldn’t be anything out of the ordinary.  Encounters like this happen all the time.  Unfortunately, this is not the end of the story.

As we drove on, the guy pulled behind us. At first, we didn’t think much of it, but then he started pulling up close to our car.  B pulled down an aisle to get away from him, but the guy followed us.  Down the aisle, he got close and attempted to get around us. He couldn’t get to our side due to the aisle width, but he made his intentions to not let us go quite clear.

This was it for even me.  I pulled out my phone and called 911.  As I spoke with the operator and gave her our location, we reached the end of an aisle.  A car stopped to let us go and then pulled behind us.  We’re not sure if they knew what was going on or not but this seemed to be key.  As we passed the store we had wanted to go to B rolled down her window in case we needed to yell for help from random shoppers.  We pulled down a few more aisles (while I was still on with 911) and it looked like we lost him.  We pulled into a parking spot and waited for the police to arrive.

The officer was great and took our information.  Unfortunately, in our panicked states, we didn’t think about getting the guy’s license plate number. Our minds were totally devoted to "get away from this crazy guy" and not on "collect evidence to give the police.". The officer noted all the security cameras around the parking lot and said he could check those.

The officer told us that we did the right thing by not stopping and confronting the guy.  In fact, the only thing he recommended that we should have done differently would have been to leave the shopping center and get on a main road.  We explained that we lost him soon after getting on with 911.  Besides, the guy had been trying to cut us off.  This was tricky in a parking lot, but would have been easy on the main road.

We questioned whether it was safe for us to go into the store as we were afraid that he was still lurking in the parking lot and would "take his revenge" on our car.  The officer assured us that we’d likely never see or hear from the guy again.  He said that the guy was probably upset that he didn’t get the last word in and decided to give us a scare.  Mission accomplished, idiot!

Not only were we panicked, but NHL was really on edge.  He wanted to leave and was nervous all through the store.  Thankfully, our car was untouched when we got back to it.

The next day, i had a fight with my father.  I had recounted the take to him the previous night and he called me to update me on their big snowfall.  He also criticized my calling the police, saying that this "escalated" the situation and that he surely has our license plate number and can track us down.  He told me that we don’t know this guy or what he’s capable of.  I replied that the escalation was taken when this guy moved from "nasty words shouted through closed windows" to "chasing through a parking lot."  As for not knowing what the guy is capable of, that’s exactly WHY we called 911.  We were being pursued by some guy we didn’t know.  If he had managed to force us to stop, would he have shouted obscenities at us and left?  Would he have pulled a bat out to smash our car?  Would he have taken a gun out to shoot us?  I needed to be sure that the police were on their way BEFORE we found out what his plans were if we were stopped.  I wound up hanging up on my father as he kept insisting that we should have kept the police out of it.

Yesterday, at work, I told a few coworkers about our weekend parking lot pursuit.  As I told the tale, I could feel a familiar panic rising inside me.  Here I was two days after the incident and the pursuer was out of our lives, but my anxiety over the situation was threatening to overwhelm me.  I distracted myself with work until I felt the anxiety subside.

While we were in the store, post- incident, NHL asked me why someone would do what this guy did.  I answered that we had just encountered the adult version of a schoolyard bully.  I told NHL that he makes himself feel better by getting good grades or doing well in a video game.  In other words, NHL is a normal person who feels pride in accomplishing something important to himself.  This was not the case for the guy who chased us, though.  That guy felt like the only way he could good about himself was to make others feel bad.  He didn’t know any other way to improve his self image than by squashing as many people as possible under him.

Unfortunately, I’ve had a lot of experience with bullies growing up.  Bullies thrive on setting the rules – placing themselves above their victims – and ensuring that their victims fear the bully.  This bully wanted to make sure that we knew that he was above us and that we feared him.  Calling the authorities wasn’t an escalation.  I’m sure the bully would have wanted us to view it as that, though.  Bullies don’t like when their victims get assistance.  However, this wasn’t some schoolyard bully taking a kid’s lunch money.  This was a grown man driving in a reckless manner and possibly threatening violence against me, my wife, and my child.  Contacting the authorities was exactly the right method to stop the bully and to protect us from his pursuit.

The bully did succeed in making us afraid of him, but this fear will be short-lived.  Whether or not he faces legal repercussions for his actions, I refuse to change my behavior (e.g. not going to that shopping center anymore) or live in fear of any bully.  As the anger over being put through this fades, what will remain is pity for an individual who can only find meaning in his life by pushing down and scaring others.

NOTE: The "Comic Red Angry Car" image above is by roland81 and is available from OpenClipArt.org.