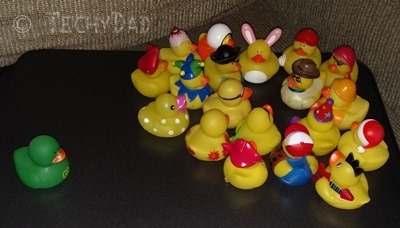 NOTE: I wrote this post this past weekend with the event fresh in my mind.  I originally wasn’t sure if I was going to post this, but it felt good to get it all out.  After a few days, though, this still bugged me and I decided that I needed to publish this.  Hitting publish isn’t going to help my child, but it might get people thinking about how children with special needs can be excluded from events.  I’d also like to thank JSL for loaning me his rubber duck collection for a quick photo shoot (even if he was asleep when I borrowed them).

As many of you know, I was bullied as a kid.  (If you didn’t know this, read My Bullied History to catch up.  The rest of us will wait.  Done?  Ok.)  Anyway, due to bullying and Asperger’s (undiagnosed and definitely not known about when I was in school), I always felt like the outsider.  I longed to communicate with people, to have friends like the other kids had, and (once I was in high school) to maybe even have a girlfriend like many of my schoolmates had.  Unfortunately, I always felt like everyone was judging me.  Every word I said, I immediately wished I could rewind and delete from existence.  Friends?  I had one.  He was a great friend (still is), but I wanted a huge social network of friends.  Not a ton of acquaintances and one good friend.  As for the girlfriend front?  Not even close.  (Those embarrassing details I’ll save for another post – and trust me, they are incredibly, scar-you-for-life embarrassing!)

Anyway, when NHL was born, I knew many things I wanted to provide for him in life.  Love, food, shelter, an encyclopedic knowledge of Star Wars, a love of Looney Tunes.  You know, the essentials.  But there was one thing I didn’t want him to ever experience:  Bullying or feeling left out.  When we got his Asperger’s diagnosis, it broke my heart.  Not because we knew he had Asperger’s.  That was fantastic knowledge that turned helping him from "stumbling in the dark" to "action plan that would make Hannibal from the A-Team proud."  Instead, it was the actual report.  There were lines about kids rolling their eyes at NHL.  Girls moving their chairs away from him.  In short, kids were looking at him as if he were a pariah and an outsider.  NHL was blissfully unaware of all of this, but we knew it was only a matter of time before it struck him.

We went to temple like we do on many Saturdays.  NHL is getting ready for his Bar Mitzvah and it’s important for him to be exposed to the whole Shabbat Service experience as much as possible.  Pulling in, I noticed a lot of cars in the driveway.  This is odd as our Temple isn’t usually packed.  Oh well, I figured there must me some event or celebration going on.  I even looked forward to it because these events usually mean a good Kiddush afterwards.  (For you non-Jews out there: After services, there’s a "Kiddush" where we all eat and socialize.  It’s a practically a contractual obligation in Judaism that any celebration needs to be accompanied by a metric ton of food.  And, yes, I’m shameless about motivating NHL to go to temple via promises of attending the Kiddush afterwards.)

As we walked in, we realized that it was a Bar Mitzvah.  Not only that, but it was the Bar Mitzvah of someone in his class.  Someone who hadn’t invited NHL to his Bar Mitzvah.

I didn’t feel weird walking in on this because Bar Mitzvahs are public affairs.  Yes, you invite family and friends, but anyone from the temple can attend the service and Kiddush afterwards.  So we would attend as "members of the Temple", not as "invited friends of the Bar Mitzvah boy."  No biggie.

As we sat down, I noticed a huge group of kids in the crowd.  Again, not a big warning sign.  It’s the boy’s Bar Mitzvah and many invite every friend they have from school.  I didn’t recognize most of the faces so I figured they were from his regular school.  We did notice some kids from his Hebrew school but it’s not a requirement that you invite EVERYONE.  We certainly hadn’t been planning on inviting every kid in NHL’s Hebrew School class to his Bar Mitzvah.  So we stayed until services were almost over.

That’s when it happened.

The rabbi invited all of the Bar Mitzvah boy’s friends and family up on the stage.  NHL started to rise, but I stopped him.  This was for the people invited to his Bar Mitzvah, I reminded him.  We weren’t invited to be there.  We were just there as temple members, not as his friends.  So NHL got the "wonderful" experience of seeing all these kids get up on the bimah (the stage/platform where the service is led from) while he was excluded.  Did I mention that there were a lot of kids?  It took a good three minutes for all of them to get to the stage and get up the stairs.  When it was all done, the Bar Mitzvah boy was surrounded by friends/family and NHL was alone.  (Yes, I was there but I know enough to know that your dad never counts in these mental equations.)

NHL excused himself to go to the bathroom.  There were only three prayers to go in the service, so I stayed while I let him go.  I couldn’t pray, though.  My insides were wracked with nerves.  Was he really that upset?  (A combination of NHL not being good at showing his true emotions and me not being good at – and doubting my ability at – reading emotions didn’t help.)  Should I race after him?  Should I stay here in case he comes back?  Will he be coming back?  I was paralyzed.

The second services ended, I raced out of the room.  Thankfully, I can be single-minded to the point of ignoring social protocols at times.  I didn’t get caught up in any hand-shaking or "how is your family doing" moments.  I just barreled out of there and headed right to the bathroom.  NHL wasn’t there.  My next guess was that he finished up and went right for where Kiddush would be held.  I went down the stairs, dodging people who had caught up to me after my brief check-the-bathroom side trip.  I was a man on a mission and nobody was going to stand in my way of making sure NHL was alright.

Sure enough, NHL was there already saving a table.  I asked him if he was alright and he assured me that he was.  He was upset only that I prevented him from immediately digging into the food that was laid out.  I felt that social protocol demanded that we at least wait for more people to arrive instead of just piling on food and stuffing our faces.  (Not to say that piling on food and stuffing faces didn’t happen, but it happened when more people were doing the same.)

NHL seems fine now, but again there’s that whole hiding his feelings thing.  He seems to have inherited a really bad habit I have.  He takes his most horrible feelings and covers it over with an "I’m fine" attitude.  He’s perfectly fine until that moment when the veneer crumbles and he lets everything spill that he’s been holding in.  And then he replaces the veneer and is "fine" again until the next crumbling.

I, on the other hand, am definitely not fine.  I’m not sure how I appear on the outside.  I probably seem fine.  Maybe a little quieter than normal, if you really pay attention.  Still, the sickening feeling is sitting right in the pit of my stomach.  I know this feeling well and can even predict how long it’ll be there for.  I’ve seen this kind of thing affect people who aren’t on the spectrum and they seem to get over it quickly.  A day later and it’s ancient history to them, or at least not something that they seem to obsess about internally for hours on end.  For me, though, I’ll be reliving every second of this event for the next three days, at least.  I’ll replay the scene hundreds of times, each time pausing it and criticizing my decisions.

"Now, see.  Right here?  Where you did A?  You should have done B!  How could you be so stupid as to have done A?  What were you even thinking, considering that A was an option?!!!  Sheesh, you’re such an idiot."

Yes, I will insult myself also.  I’ll let my internal critic rip my self-worth to shreds.  Ironically, I’ll self-exclude myself from social interactions because engaging in them means crawling out of my own head and this will seem about as easy as scaling Mt. Everest.

"Sure, I’d love to have a conversation with you.  Let me just get out some ropes and scale this sheer rock wall, first."

Eventually, I’ll get over it.  Where "get over it" means I’ll internalize it enough to not think about it and will "be ok" until the next event pushes me back into my self-criticizing hole.

The worst part?  The feeling that NHL is going through this too.  Maybe he’s perfectly ok.  Maybe he had his upset moment and moved on.  If so, I seriously envy him.  Or maybe he’s secretly ripping his self-confidence to shreds as well trying to think of what he could have done to have been a better friend so he’d have been invited.  Maybe he’s thinking back on every "wrong" action he’s ever taken (regardless of whether he was really wrong or not) and criticizing himself about it.  And, if he is doing this, then I have no clue on what to do to help him.  How do I help my son defeat a demon that I myself have yet to slay?  One that, right now is sitting on my shoulder telling me that I’ve failed as a father and obviously have never helped my son with anything ever.  (A complete lie, I know, but the demon is persistent and says it until I begin to believe it.)

How do I make him feel ok with being excluded when I still feel that pain of being left out?