Jungle Book – The Wisdom of Baloo 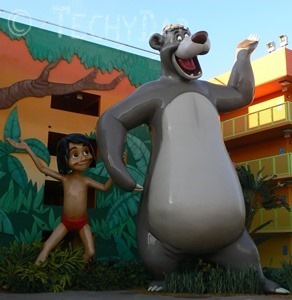 Last week, my boys had off from school. One day, B took them to the movies to see a The Jungle Book. While I didn’t go (my day job frowns on taking a few hours off to see a movie), it inspired me to watch the classic animated movie again.  While watching it, I was struck by Baloo. He’s supposed to be a stereotypical slacker. Someone who’s big on partying and short on responsibility.  (A "shiftless, two-bit jungle bum" according to Bagheera.)  Upon watching the movie again, though, he’s surprisingly wise.

A quick warning: There might be spoilers for the new Jungle Book below, but only if the new movie follows the 1967 animated movie.  So technically these would only be spoilers if you haven’t seen the 1967 movie and I think the statute of limitations has long since passed for that film.

Before I get to Baloo, let’s look at Bagheera.  He’s supposedly the responsible one of the movie. He finds baby Mowgli and takes him to the wolves who raise him as their own child.  When Mowgli’s life is threatened by Shere Khan’s return, he volunteers to lead Mowgli back to the man-village where he will be safe.  Bagheera rescues Mowgli from Kaa – and winds up nearly being eaten himself.  He’s definitely a role model, right?

After meeting the elephants, Mowgli asks where they are going.  Bagheera tells Mowgli that he’s going back to the man-village immediately.  Mowgli insists he’s not going and Bagheera attempts to force him to go by pulling on his shorts with his teeth as Mowgli holds onto a tree.  This ends with Bagheera falling into a river.  (Side note: Those shorts were insanely strong.  A panther pulling on them should have ripped them to shreds! Then again, naked Mowgli wouldn’t make for a family friendly Disney movie.)  Bagheera, frustrated with Mowgli, declares that he’s on his own and leaves him.  This, not even 10 minutes  (screen time wise) after Bagheera told Mowgli that he wouldn’t last one day and after Mowgli was almost eaten by Kaa.

I can sympathize with Bagheera when it comes to dealing with stubborn children.  Both of my boys can be exceptionally stubborn at times.  There are definitely times when I think that it would be so easy to just walk out the door and never return.  The thing is, though, that those thoughts would never be put into action because I care about my kids too much.  Even when they’re being a major pain in the neck and not listening, I might leave to a different room to cool down but I’d never leave them on their own.

When Baloo encounters Mowgli, he could have just kept walking.  Instead, he noticed that Mowgli was upset and alone.  He tries to teach him to defend himself and purposefully loses to Mowgli to help cheer him up.  Then, Baloo teaches Mowgli about "The Bare Necessities."

This is where Baloo gives three under-rated gems of advice.  First of all, Baloo sings that you’ve got to "forget about your worries and your strife."  All too often, we let our worries dominate our thoughts.  It’s important to give ourselves time to put our worries aside.  If we don’t, we might miss some wonderful aspects of life.  I learned this lesson a long time ago.  I’d hyper-focus on something that went wrong (especially if I did or said something wrong) and would ruminate on it for days.  It didn’t help the situation in any way.  It didn’t make me react differently the next time.  All it did was cause me to obsess and doubt every action I took.  I realized that I needed to be able to examine whether I could do anything about a worry at that moment.  If I couldn’t, that worry needed to be shelved until such time as I could make a difference.

Next, Baloo sings about using claws to pick prickly pears but not needing them for big pawpaw fruit. This is intended to be humorous (with Baloo singing a veritable tongue twister) but is sound advice.  Every situation is different and the approach needed for one might be totally different than the approach that the second situation needs.  If you go through life with just one approach – and an inflexible attitude that all situations need to have that approach for their solution – then you’re bound to "prick a raw paw."

Finally, and perhaps most importantly, Baloo sings about minimizing your life.  Like many people, we’ve accumulated a lot of things that seem important, but which we could easily live without.  For example, a year ago we decided to cut cable.  Before doing this, we wondered just how we’d survive without hundreds of channels of video programming coming into our house at every possible second.  The answer was that it was a lot easier than we initially thought it would be.  Were there bumps along the way?  Sure, but it turns out that cable TV isn’t one of the "bare necessities" and you can live a full life without it.  When you cut the extraneous out of your life, you leave more time for the activities that you actually are interested in.

This is especially true for pursuing things that you can’t obtain.  Many people, perhaps envious of what others have, stress out over not having X, Y, or Z.  This stress negatively impacts their lives and, ironically, makes it less likely that they’ll get what they desire.  To quote Baloo: "Don’t spend your time looking around for something you want that can’t be found. When you find out you can live without it and go along not thinking about it, I’ll tell you something true.  The bare necessities will come to you."  That’s some real Yoda-level wisdom being dished out there.  (Obligatory Star Wars reference since today is Star Wars Day.)

When Baloo is convinced by Bagheera that Mowgli needs to go back to the man-village, he’s heartbroken.  In his short time with Mowgli, he had come to love Mowgli.  On the other hand, Bagheera, someone who’s known Mowgli nearly his entire life, doesn’t seem upset at all about Mowgli being sent away forever.  When Baloo fumbles in his "man-village talk" with Mowgli and Mowgli runs off, Baloo is determined to find him.  For someone who sings about reducing your life to "the bare necessities," he certainly knows what is important enough to hold on to.  Finally, when Shere Khan attacks Mowgli, it’s Baloo who stands up to the tiger, risking his own life to save the boy.

In the final analysis, Baloo might not be the most responsible character in The Jungle Book, but he has a hidden wisdom about him.  Many people in today’s society would benefit from channeling their inner Baloo from time to time. 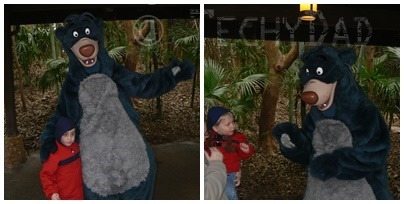 NOTE: The image of Baloo and Mowgli above is a photo I took at Disney’s Pop Century hotel in 2010, during the boys’ first trip to Disney World.  They also got to meet Baloo.