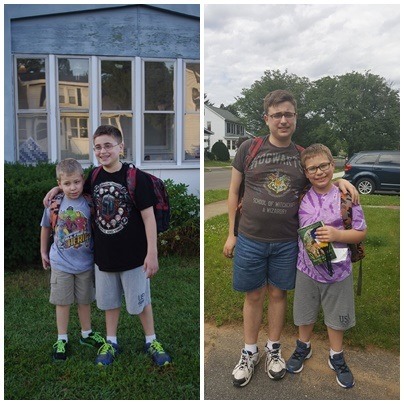 Three years ago, we were very nervous. Our son was about to graduate from elementary school and move to middle school. Elementary school had been one fight after another. We moved schools after our son was attacked and the principal tried sweeping it under the rug. We fought with the new school’s principal to get a 504 plan and got yelled at by him because we went above his head when he was dragged his feet. We were denied an IEP because our son’s intelligence meant that they didn’t think he was suffering academically (despite him suffering socially and emotionally – both qualifiers for IEPs). We fought to get his aide changed when the one he was assigned thought yelling at our son repeatedly was acceptable.

Even when things did seem to go NHL’s way, it never lasted. Good aides and teachers had to leave. Quiet moments were punctuated by new crises. We could never enjoy the good times because we knew that something bad was just around the corner.

Then, the most amazing thing happened: Nothing.

Well, nothing bad at least. NHL’s aide, JG, met him at orientation and they quickly hit it off. JG went above and beyond, even taking it upon himself to learn about autism so he would understand NHL better. He was there by NHL’s side every day, but wasn’t overbearing. He knew when to pull NHL back and when to let him be himself. He slowly, carefully guided NHL all the while walking that all-too-thin line of friend, mentor, and teacher.

Speaking of teachers, NHL’s were incredible also. They saw the potential in him and worked to bring it out. They struck up a strong rapport with him and gained his trust – something that wasn’t easy to do. After years of struggle in elementary school, NHL’s love of learning was like a candle that was about to flicker out. All of his middle school teachers have turned that flickering candle into a raging bonfire. He loves school again so much that when he had the flu one year, he was upset that he couldn’t go to school for a week. That was the worst part of the flu to him. Not the aches and the fever, but missing out on learning more.

The multiple classes actually worked in NHL’s favor. As with many people on the autism spectrum, NHL loves his schedules. He doesn’t deal well if they aren’t strictly adhered to (at least, not without prior warning). In elementary school, though, the teacher’s schedule might say that math ends at 1pm, but since the same teacher teaches all subjects, she might go long. NHL did not like that at all. In the middle school, though, the bell rings when the class is over. The teacher might be able to shout out a homework assignment as the kids leave, but he/she can’t decide that the kids all need to stay for ten more minutes. The schedule is strictly enforced and NHL thrived with that.

He also thrived with the subject matter. In elementary school, they would often go over the same material over and over to make sure that all of the kids understood it. This left NHL bored. He understood it the first time and couldn’t understand why he wasn’t being allowed to learn more. In middle school, though, the pace was picked up which suited NHL just fine. His mind was a sponge that was finally being given the water it so desperately wanted to absorb. He also was placed in honors classes in the seventh and eighth grades which helped surround him with more students who were intent on learning and not messing around.

When it comes to the students, he found people who were willing to accept him quirks and all. I had the pleasure of going on four field trips with him during his middle school career and each time I loved seeing him interact with his peers. NHL is like me in so many ways that I feared he’d be like me socially. I was bullied and reacted by withdrawing within myself. The less I showed the outside world, the less ammunition I thought I’d give my bullies. I desperately wanted to socialize, but always felt embarrassed by my every action.

NHL, on the other hand, feels no such embarrassment. Yes, this can lead to times when he does things that are inappropriate, but it also means that he doesn’t hold back when forging friendships. I liked that the students seemed to forgive NHL his excesses and still wanted to interact with him. To give one example, during a recent trip to Montreal with his class, I was in charge of NHL and three other students at the Jean-Talon Market. There was so much to see and eat, that the kids wanted to see everything. Unfortunately, part of the stop involved completing a scavenger hunt. NHL can’t help himself when it comes to scavenger hunts. He feels compelled to speed through whatever area he’s in until he’s completed it. NHL’s classmates were getting visibly upset with his constant verbal tugs to move onto the next thing so he could fill in the next line. The one girl in the group, who’s been friendly with NHL for years, threatened to judo chop him if he didn’t stop. And yet, later that day when we went shopping in the underground market, she voluntarily joined NHL and I with another of his friends on our shopping adventure. She knew how to express her frustration with NHL without completely severing herself from him.

I could go on and on about how wonderful middle school was for NHL. Were there bumps? Sure. Still, they were so few and far between that we actually found ourselves relaxing. We didn’t react to every small speedbump as if it meant that everything was going to grind to a halt. We began to (*gasp*) trust that his teachers and aide could address it – which they did. They thought of us as all being part of a team whose job it was to make NHL excel and they worked WITH us to make that happen instead of working against us because they thought they knew better. And guess what? When we all worked together, we succeeded in making NHL succeed.

Finally, I’ve talked about everyone but NHL. Middle school would still have been a disaster had it not been for NHL. All the support mechanisms in the world won’t help someone if they don’t apply themselves. After his first marking period was over, NHL received the honor roll, but the middle of the three levels. He immediately declared that he was getting the highest level the next marking period. I tried to caution him that we just wanted him to do his best and he didn’t need to worry about grades as much. I didn’t want him to be disappointed. Silly me. Like Babe Ruth pointing to the outfield, NHL kept setting goals for himself and knocking them down. One marking period, his science grade went DOWN because he “only” got a 97 on the final exam.

NHL applied himself again and again, learning everything his teachers taught him and making it look easy. He struck up friendships and pushed himself more and more. Every time we thought “there’s no way NHL will be able to deal with this”, he not only dealt with it, but aced it. Sure, there were times when he held back his meltdowns until he came home. Times when his happy-go-lucky attitude switched to angry, at-the-end-of-his-rope teen the minute he entered B’s car. Still, we were happy to take that bullet because it meant that NHL was coping better in school itself. (We also worked with his teachers to find the sources of these delayed meltdowns and fix them in the future. Yay, team!)

So now NHL is off to high school. He’s leaving behind the familiar and facing the unknown again. We are nervous only because middle school has set such a high bar. Still, we know what NHL is capable of. He has such great potential inside of him and is am amazing young man. I can’t wait* to see him grow into an exceptional high school kid.

* Well, maybe I can wait a little. Stop growing up so quickly NHL. That goes for you too, JSL.