The Guilt Trips Of Toddlers 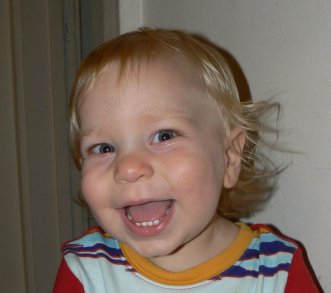 I remember when I first dropped NHL over at day care.  He clutched at my suit-jacket and screamed as if I was leaving him at the top of a desolate mountain to be eaten by wolves.  Staying with him until he calmed down didn’t work, that just postponed when his meltdown would occur.  Slowly leaving didn’t work either, it just prolonged the agony.  The only way to do it was the "band-aid on a hairy limb" method:  Tear him off of me and get it over with quickly.

Even so, I left day care that day convinced that I was the worst dad in the world.  How dare I leave him in the care of those monsters!  Couldn’t I hear him howling for me as I walked down the hallway?  Why didn’t I just turn around and run back to him?

As NHL grew, drop offs got less and less traumatic.  Finally, one day, NHL fully accepted that he was going off to play, Daddy was off to work, and Daddy would, in fact, be back later.  In fact, NHL would be so excited about playtime that he would forget to hug and kiss me goodbye.  The rolls were reversed.  Now he was trying to tear away from Daddy and Daddy was clawing at him trying to get one last hug and kiss.

Now, NHL is in kindergarten and he has a little brother who is a few months older than NHL was when he started day care.  NHL loves kindergarten, but JSL hates it.  Apparently, he calls for NHL constantly during the day.  Not just that, though.  He hates for Daddy to leave for work now.  As I left this morning, JSL crawled over to me, used my leg to pull himself up, and wailed at me to stay.  (At least, I think that’s what those sad cries of "Da-Da" were.)

I’m sure he’ll get used to it eventually, and the "Worst Dad In The World" feeling isn’t as bad.  (Partially because I’m leaving him at home — a familiar place to him — and partially due to learning to cope now that I’m dealing with #2.)  Still, I feel pretty bad every morning when I leave JSL behind.  That bad feeling is balanced, though.  For when I return at the end of the day, I’m sure to be greeted with an enthusiastic "Da-Daaa!"