Ironing Then And Now 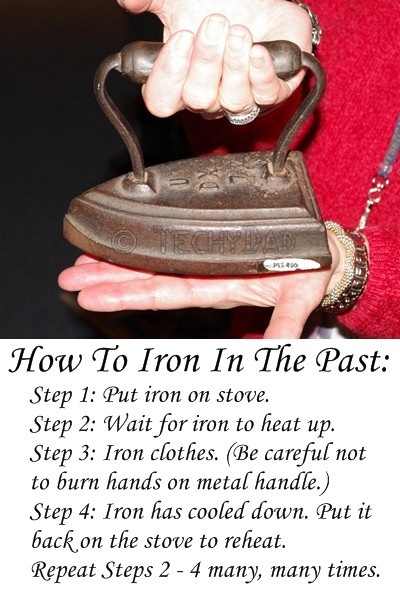 Disclaimer: This isn’t an endorsement of this product.  No compensation was given for featuring it here.  I merely needed wrinkle releaser spray to illustrate a point and we had it in the house.

A Lesson In Tough Times 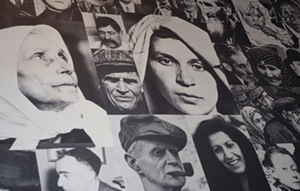 A few days ago, NHL lamented about how rough his life was because I was sending him to bed without him having dessert.  (Dessert isn’t an "every night" proposition in our house, but the kids keep lobbying for it to be a required part of dinner.)  This "hard knock life" moment was contrasted with a program we attended at the New York State Museum.  During the various components of this program, NHL got to see just what immigrants (especially Jewish immigrants) who came to America in the early 1900’s had to deal with.

We started out with viewing the opening scenes from American Tail.  The Mousekewitz family is celebrating Chanukah when a gang of cats (belonging to the Cossacks) raids their village.  Their home is burned to the ground, but luckily they survive.  This was actually a pretty good portrayal of the real happenings in Russia at the time.  Jewish villages would be raided and Jews would, at best, lose much of their meager belongings.  At worst, they could lose their lives or the lives of their loved ones.  The situation was horrible with no chance of improving, so they left everything they knew behind to head to America.

I spoke with NHL about this and asked him to imagine being in that situation.  I told him to pretend that we were leaving and he could bring one item with him.  Maybe a stuffed toy, maybe a book, but only one.  He said that he didn’t know what he would choose, realizing what a horrible decision it would be for a child to have to make.

After a long trek to a port, the fleeing refugees would be packed on a ship.  And I do mean packed.  The ship’s owner was earning profits based on how many people were stuffed onto a boat.  The more on board, the more money he made.  Whether these people had enough room to move around (they didn’t), had room enough to sleep (they didn’t), or had enough food (which they had to bring with them) didn’t matter.  What mattered was putting a few more paying customers on the boat so that the boat’s owner would get more money.

The trip would take months.  Kids, cooped up below decks on the ship, would go stir crazy.  I’ve parented kids who went stir-crazy after a few too many days stuck indoors due to bad weather.  That was tough.  But in my case, my kids had adequate food, facilities, toys, etc.  The kids-stuck-on-an-overcrowded-boat-for-months-with-nothing-to-do level of stir-crazy strikes any parent with sheer terror.

Speaking of adequate facilities: At one point, the presenter described the "facilities" on the boat.  You would get a bucket which you did your business in.  As she said this, I noticed two girls at the far end of our group.  Their faces showed overwhelming disgust at the thought of this situation.  Of course, once the presenter mentioned how you would then be responsible for dumping your "business" overboard and washing out the bucket for the next person, the girls looked like they would be sick right then and there.

Destination Reached… Or Was It? 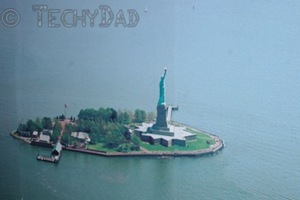 Once the weary travellers arrived in America, they would be processed at Ellis Island.  Many would get through, but sometimes individuals would be identified as being ill.  (After all, crowded boat + "no facilities" + no medical care + long trip equals illnesses running rampant.)  If you were marked at sick, you would be put on a boat back home.  It didn’t matter if your entire family had gone through already.  Children would be sent home by themselves while their parents would be let through.

Tough Life In The New World 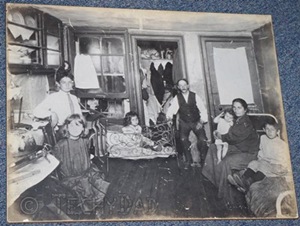 If the travellers were admitted into America, they didn’t face "streets paved with gold."  Instead, they would get to share a tiny apartment with 6 other people.  Four of those apartments would share a single bathroom.  There would also be a language barrier (which one presenter simulated by speaking to us for over five minutes in fluent Hebrew while we looked puzzled).

Perhaps the worst, though, was the presenter who described the working situation.  Children as young as 9 would work long days – 6am to 10pm.  They would earn five dollars a week, if they were lucky, but would also often have their pay docked for such things as renting the chair they sat in, paying for the thread they used in their job to sew garments, and taking too long going to the bathroom. 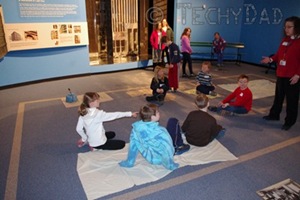 This presentation led to NHL and me talking about how he would feel about being forced to work like this.  NHL is a big early bird, frequently waking up at 5:30am, but were we living in this time, he would need to wake up as much as an hour earlier.  In addition, while he goes to sleep at 8pm now, were he working like the immigrants did, he wouldn’t get to sleep until after 11pm. 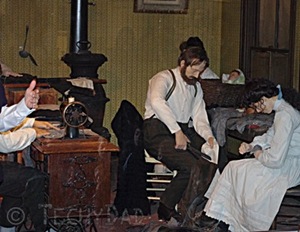 After this presentation, NHL not only came away having learned about a big part of our history.  Perhaps even better, he left with a renewed appreciation for his own life.  He gets to sleep in a comfortable bed, the extent of his "work" is homework for school, has toys to play with, and has plenty of room to move around and play.  His life is infinitely better than that of our immigrant ancestors.  Of course, were it not for them leaving everything they’ve ever known behind and braving unimaginable hurdles, our lives would not be as good as they are.