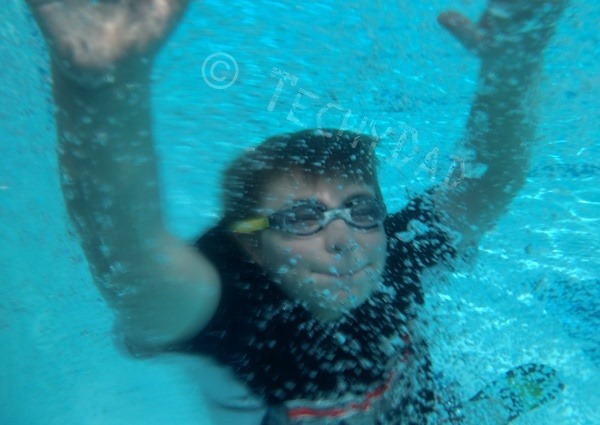 Today is the first day of school.  This means that summer is over (unofficially, at least).  My kids once again need to worry about getting ready in the morning, homework, and other "fun" school-related chores.  Before the sun set on summer fun for the last time, though, we had one more fun moment.  We went to Aunt S’s house by the lake.  There, they enjoyed many fun activities with their cousins and other members of B’s family.

Ok, this is just a steep hill and not a mountain.  Still, the boys had a blast climbing the mountain and running down it.  I, meanwhile, liked climbing it for the view it afforded me. 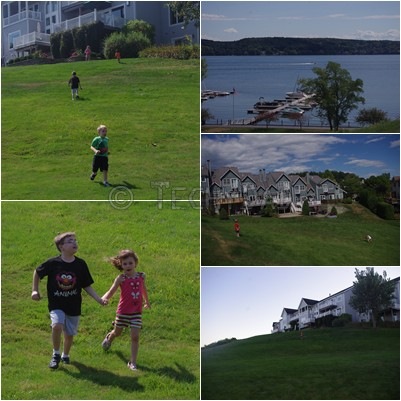 What good is a house on the lake without a boat?  Though NHL opted out in favor of the pool (more on that later), JSL and I went out with Nana, Papa, Cousin A and Uncle M.  The trip began in an eventful manner with the engine dying.  We were just far enough from the dock to see it slowly drift away with no way to get back.  We did have a good view, though.

Luckily, Cousin A found a loose fuel injector line, fixed it, and we were good to go.  JSL loved driving the boat and watching Cousin A water skiing.

The boat ride ended with a bang.  Or rather a splash.  JSL was standing at the front with Papa when a big wave hit the boat soaking both of them.  (Sadly, my camera was pointed elsewhere at that moment, so I didn’t capture it.)  JSL was first upset by the sudden face full of water but he quickly decided that it was funny instead. 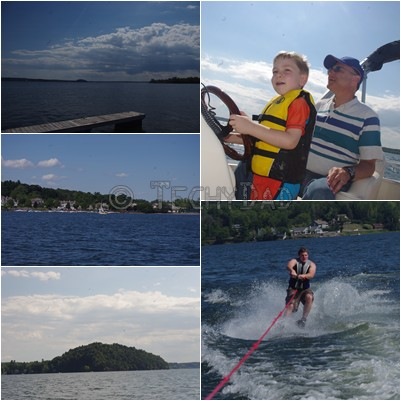 As mentioned before, NHL opted to go in the pool.  As I understand it, he and Cousin S did some diving into the water.  The next day, JSL, NHL, B, and I went to the pool together.  B didn’t have her swimsuit, so the boys and I went into the water together.  JSL was apprehensive, especially once he felt the cold water, but he soon got in the pool spirit and was laughing along with NHL and me. 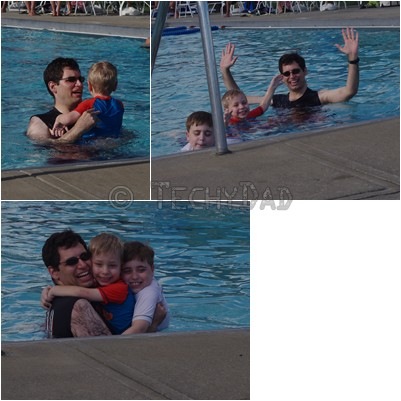 Our last visit was to the beach right near the pool.  There, NHL and JSL broke out some sand toys and had fun digging in the sand.  We also walked all the way out to the buoys that mark the end of the "safe to walk/swim" area.  Having grown up on Long Island, the beach brings back some great memories for me.  I still find it very relaxing to just sit chest-deep in the water and let the waves rock me back and forth.  I showed this to NHL and he agreed that it felt nice and calming.

Of course, calm isn’t as much fun and getting down and dirty in the sand. 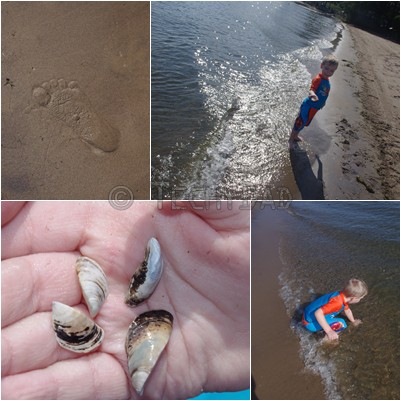 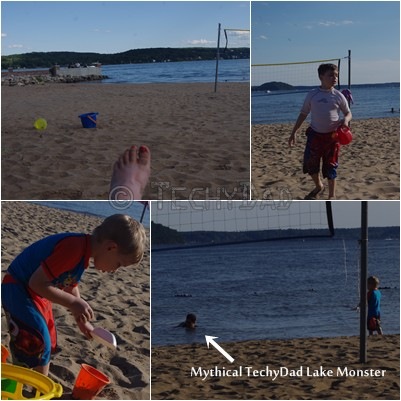 Yes, school might be starting now.  Their freedom to do whatever they want will be curtailed as things they WANT to do take a backseat to things they HAVE to do.  Still, it’s nice that they had one last summer weekend milked for every ounce of fun it contained.

NHL has been getting swim lessons, but unfortunately things haven’t been going too “swimmingly.”  During the first swim lesson, during which B accompanied him, NHL didn’t get into the pool until the very end.  So this time we went prepared.  B’s parents took NHL and I went along with them.  Under my clothes, I had my bathing suit on so I’d be ready to jump into the pool.

Things started out well enough.  We got to the pool early and walked around for a bit.  Then we got NHL changed (easily done since his swimsuit was on under his pants).  After a short wait, it was pool time.  NHL went with his teacher while B and I followed the other parents into the “parents’ viewing room.”  This room was right next to the pool room and had a nice big window so all of the parents could see what was going on.  Every single parent there could see exactly what was happening in the pool.  Remember that.

All of the kids sat down by the pool while the teacher got into the water.  They had these little stands in the pool so that the water wouldn’t be too deep for the children to stand in.  One by one the children got into the water.  Well, one by one minus one: NHL.  He didn’t get in.  We couldn’t hear what his teacher was saying to him, but I could see that she was using every trick in her book to convince him to get in the water.  When dealing with NHL, though, you can have an encyclopedia and it won’t be enough.  He refused and eventually, we could see that the lesson was continuing without him.

Now, we didn’t pay for “sit by the pool” lessons, so we knew it was time to act.  I went in (with B behind me) and tried my best to get him into the pool.  When that didn’t work, I took NHL over to B and she tried.  No go.  We decided it was time for me to jump into the situation, literally.

I got changed in a nearby locker room.  (Side note: Does it show how geeky I am that I felt like a superhero, pulling off my clothes to reveal my suit underneath?

At first, I just put my feet in the water and tried to get NHL to go in first.  When it became obvious that he wasn’t budging, I sighed and jumped into the water.  Then I grabbed NHL and pulled him in.  That’s when things got “fun.”  He completely freaked out.  Instead of just standing on the platform, he grabbed my shirt (I wasn’t going topless in front of all of those parents).  His legs wrapped around my suit and pushed down.  He had a death grip on me and was screaming at the top of his lungs.

Now my suit stays on just fine usually, but it doesn’t tie tight at all.  The force of his legs pushing on my suit was enough that I could feel the suit slipping down.  If I didn’t take action, I’d be showing much too much TechyDad to the parents!!!  I let go of NHL (his deathgrip was more than enough to keep him on me and not in the water) and fixed my suit.  After that, I managed to push NHL onto the platform.  Crisis #1 averted!

After awhile, he was calm enough to watch the other kids and not grip onto me.  Still, I had to be behind him holding him or he’s start to freak out again.  And anytime water splashed near or in his eyes, he’d get upset.  He also wouldn’t participate in the floating or kicking practices.  So we were now paying for “stand in the pool” lessons.

Finally, it was “wind down” time and the teacher took him out of the pool.  Of course, I was still in the pool.  I decided that I should get out too so I looked for an exit.  One problem: NHL’s isn’t the only class.  In fact, there are so many classes going on that the pool becomes packed with kids and teachers.  It was all I could do to not interrupt another lesson, forget about actually getting out.  So there I stood in the pool feeling like a fool with all of the parents watching through the glass.

At last, his teacher got out of the pool too and I saw an opening.  I got out and took NHL to the locker room to get changed.  This is where I encountered the next embarrassing item.  (And this one is all my fault.)  I have a few pairs of underwear that B and I purchased for laughs.  Joe Boxer type boxers with funny sayings on them.  The only reason that I feel comfortable wearing them is that I know that B is the only one who will see me in them.

All in all pool day was a ton of fun that I just can’t wait to repeat.  (Note the sarcasm dripping more than a bathing suit fresh from a pool.)