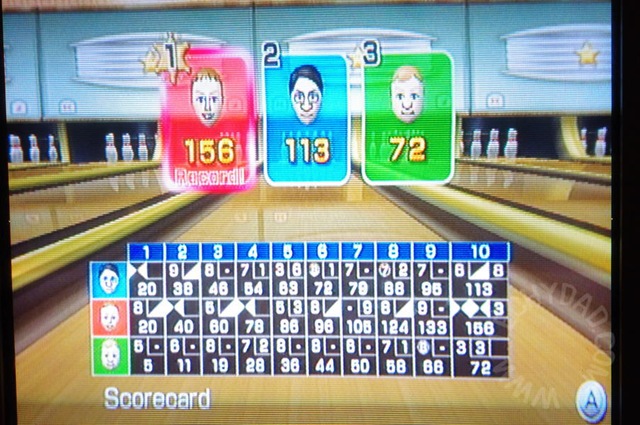 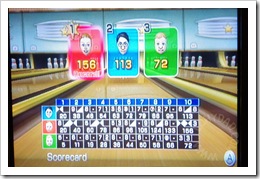 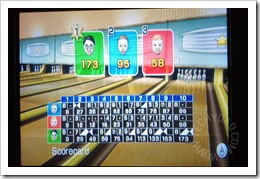 Over the weekend, we did some shopping.  We went to Dick’s Sporting Goods to look for some shoes, we went to Border’s to look for bargains and we went to Target to get some needed groceries/clothing.

In Target, however, NHL began to complain.  This wasn’t just a normal whine, though, it began to turn into yelling at me and being disobedient to make a point.  B took the shopping cart with JSL while NHL and I went to the car.  Actually, we first stopped outside the store in the hopes that I could get him to calm down.  When this didn’t work, we went to the car.

NHL wasn’t out of the woods, though.  During his scream-fest, I told him to calm down or else.  When he pushed the “else”, I told him that he wouldn’t get the book he had just bought from Borders.  He didn’t seem to care so I also took away the puzzle he had gotten.  This didn’t make a dent in his attitude so I brought out the big guns.  I told him he couldn’t play the Nintendo DS.

Now, *this* got a reaction.  I wrote about his Games Addiction last week and it is still very much in force.  NHL *loves* playing his DS.  If he had his way, he’d go through the entire day casting Lego Harry Potter spells.  So losing the DS for the weekend was a big hit.

At the car, NHL sat in silence.  When he was fully calmed down, we went back into Target.  We checked the registers and then walked all around the store, but, unfortunately, we couldn’t locate B and JSL.  Finally, we decided to wait for them at the car.  As we approached, I saw them waiting for them at the car for us.  Somehow, our paths had crossed without either of us noticing the other.

Later, I’d find out that B had tweeted about “losing” us.

This morning, NHL celebrated the ending of his DS exile with a rousing game of Lego Harry Potter.  It wasn’t long before he was triumphantly declaring that he had gotten past Snape and could make some Polyjuice Potion. 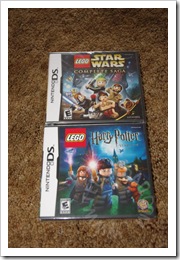 For his birthday, NHL got many great presents: Books, board games, and even puzzles.  His favorite gifts, though, were likely the Nintendo DS games.  He received Tetris Party Deluxe, Lego Star Wars: The Complete Saga, and Lego Harry Potter: Years 1 – 4.  As soon as he was able to, he ripped open the packages and began playing.

Since then, he’s been nearly inseparable from his DS.  He’ll sit on the couch or on his bed for hours on end casting spells or swinging his lightsaber.  He’s become lost in the world of video games.

Of course, his video game addiction began early on.  I introduced him to online Flash-based games when he was very young.  He took to them quickly and showed quite an aptitude for figuring out how they work.  Later, he began playing Nintendo Wii with me.  He was very proud (as was I) the first time he beat me in Wii Bowling. 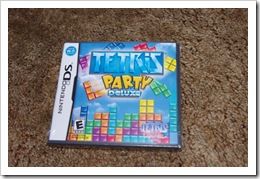 When B won a Nintendo DS in a giveaway awhile back, we set out finding some games that we liked and that NHL might like.  B’s DS was quickly coopted by NHL to play Carnival Games, Super Mario and other games.  With his latest batch of games, I don’t think we’ll pry him away anytime soon.

NHL takes after me when it comes to video games.  I have fond memories of staring at an Atari 2600 screen playing Star Raiders and other games.  When we got our first Nintendo, I was in awe of the incredible graphics of the original Super Mario Brothers.  When I wasn’t reading a book, I was on the computer jumping, dodging, firing and more.  Nowadays, I don’t have much time for games, but I still enjoy playing them here and there. 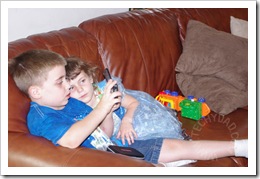 At one point, I watched over NHL’s shoulder (and helped a bit) as he played Lego Harry Potter.  It looked like fun.  So I decided to give the game a go.  After NHL was asleep, I started a new game.  Luckily, it allows for 2 save games so NHL and I can play separate games.

I helped Harry collect presents in Privet Drive.  I prepared him to go to Hogwarts.  I learned some new spells and battled some enemies.  I ventured into the Dark Forest.  Before I knew it, it was almost 1am.  After saving my game, I reluctantly put the DS away and headed to bed. 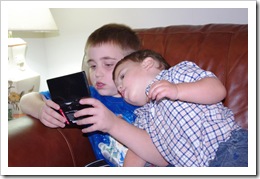 I found that the game, in many ways, is very easy.  You have unlimited lives so “dying” just means “being sent back a short bit.”  Puzzles aren’t very hard to figure out.  Still, it’s a lot of fun.  (Just what’s needed after a hard day’s work.)  I think I enjoying shattering objects using the Reducto spell a bit too much.  (Couch? Reducto! Table? Reducto! Pile of books? Reducto!  Christmas Tree? Reducto!)

The next morning, NHL began his gaming.  He instantly got upset when he saw that I had gotten further along in the game than he had.  (His exact words were “Dad, I’m embarrassed that you got further in the game than me.”)  I think he’s been furiously playing more to make sure that he takes the Lego Harry Potter lead.  A little friendly competition between father and son never hurt.  I think tonight I’ll take up my magic wand and cast a few more spells.