Yesterday, I posted about “Harvest Time.” Back in the Spring, we did some plant shopping and decided to get a few potted vegetables to grow. We bought two tomato plants, one zucchini plant, and one cucumber plant. I bought one Jalepeno plant to be “mine.” While doing so, I joked that the spicy peppers would keep the local rabbit away from our plants. NHL, meanwhile, chose a peppermint plant because he liked the way it smelled. We decided not to plant all of these in the ground, but rather to pot them. Plants potted, we waited for the warm summer weather to help them grow.

Instead of our normal warm weather, summer started wet and cool. It was so rainy that, on multiple occassions, I had to dump water standing in the pots because the soil was too soaked to allow it through. I noticed that a few of our plants were withering, not growing. In addition, the soil had a strong sulfur smell. I dumped as much soil as I could and repotted the plants in fresh soil. I also noticed that the bottoms of the pots (the “trays”) were on incorrectly, blocking the drain holes. This overwatering led to tomato and zucchini plants not producing any fruit – or vegetables as the case may be. Well, the tomato plants finally produced some tomatoes a week or so ago, but they’re still green so they don’t count yet.

The peppermint plant, after some initial overwatering, took off like a weed. I later learned that it was a good choice to pot it and not plant it. Peppermint will spread throughout a garden taking over as much as possible and spreading roots deep underground so that it would be nearly impossible to kill. The smell of the peppermint leaves was great and I did some searching on uses for peppermint leaves. So far I’ve chewed them (very tasty) and poured boiling water over them for peppermint tea. The latter tasted like liquid candy cane… very delicious!

The jalepenos were trickier. NHL and JSL don’t like spicy foods and neither does B as a general rule. (She will eat foods with some spice, but shies away from anything beyond “medium.”) So I needed to find a recipe that wasn’t too hot and could be made for one. This, I found in Peanut Butter Jalepenos. I sliced a couple of jalepenos open, removed the seeds and white insides, then refilled them with peanut butter. I closed the jalepenos back up, wrapped them in foil, and then baked them at 320 degrees for 20 minutes. The resulting pepper was completely mild. B thought there was some spice left to them, but I didn’t taste any. In any case, it was quite tasty and I will be making that again. (I’ve still got peppers left and the plant is producing still more!)

Then, a couple of days ago, I happened to look at the cucumber plant. I was going to show NHL some baby-cukes that it was producing – little spiky stubs about an inch long – when I moved a leaf. There, sitting on the ground, was a fully grown cucumber! I called for B, plucked off the “Surprise Cucumber” and showed it to everyone. NHL was excited. This was the first time we had been able to grow something that he would eat! (He liked chewing the peppermint leaves, but that isn’t really the same.)

Now, if only those tomatoes would ripen our harvest would be complete. In the meantime, enjoy some jalepeno pepper photos (including the “PB Peppers”). 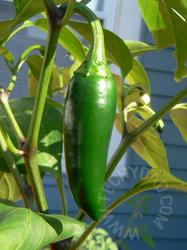 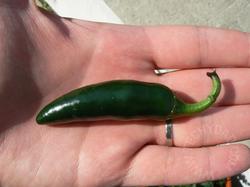 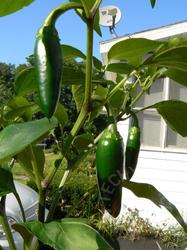 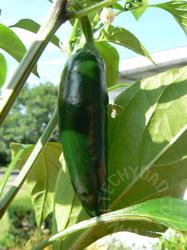 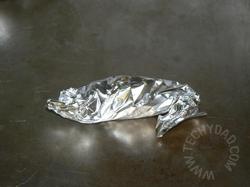 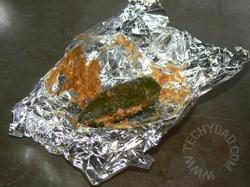 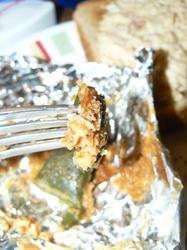