Yes, that’s Mr. Six dancing up a storm. And this wasn’t the only dance number he performed. We got there during the end of his routine, but managed to catch some of this:

After the show, NHL went up to have his photo taken with Mr. Six. He had gotten similar photos taken before, but this guy really got into the role. 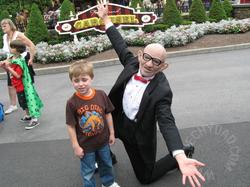 So, if your week had a theme song, what would it have been?