After our trip to Disney World last year, I started blogging a day by day account of the events. Then I just stopped. I meant to pick it up again, but things happened to distract me. Has it really been 7 months? With Disney Social Media Moms coming up (and thus a new source of Disney World blogging approaching), I decided I needed to finally knuckle down and finish this series up.

All that said, let’s see where we were last time Ah yes, we had enjoyed a Mother’s Day dinner with “Mom” at the 50’s Prime Time Diner, shopped at Downtown Disney and gone to sleep. This takes us to Monday, May 11th and the Animal Kingdom. 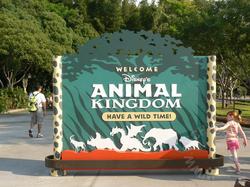 Now, B & I had been to the Animal Kingdom before during our honeymoon but B’s parents had never gone. The last time they were in Disney World, the Animal Kingdom park wasn’t open. (I don’t think it was even planned at that point.) Thanks to our prior experience, we knew just what to go on first: Kilimanjaro Safaris.

Of course, to get there, we first had to enter the park. As we did so, I ran over to Guest Services and got a great Timon and Pumba Safety Guide. It had a coloring book and cards showing how to stay safe in Disney World. (Pumba always seemed to get the short end of the stick on the cards.) 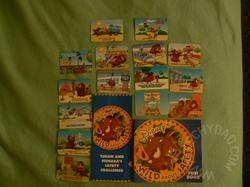 When I got back together with B and the boys, we walked over to her parents where they were examining poop. No, you didn’t read that wrong. They were looking at poop. A woman was there showing off three kinds of animal dung and having people guess which was which. Fun for the whole feces… I mean family! 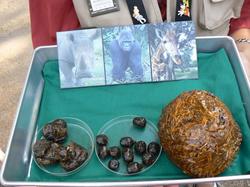 We walked around the Tree of Life garden a bit seeing all of the animals there and then headed off to Africa. Surprisingly, Africa’s just a short walk from Disney World, Orlando. Who knew? We hopped on the Kilimanjaro Safari tour bus and off we went. 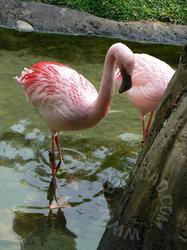 We marveled at the various animals, but were really waiting for the giraffes. You see, my mother in law loves giraffes. And we weren’t disappointed. At one section, we stopped and we could see the car in front of us stopped with a giraffe sticking its head in the car. As we were stopped another giraffe came up from behind us. It was so close, I could have jumped out of the car and run up to it in about 30 seconds. I would surely have been tossed out of Disney World (possibly injured too). Still, it should give you an idea of how close we were. 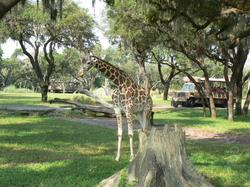 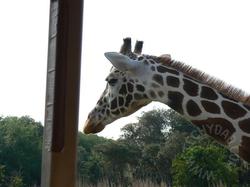 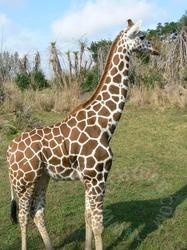 During the ride, we also saw elephants, hippos, Nile crocodiles, lions (the males sleep 18 hours a day… it’s good to be king!) and a monkey that was quite intent on showing us… well, “himself.” We also got stuck behind some slowpoke ostriches. They were taking their time meandering on the road and we were stuck behind them until they moved off to the side. Who knew that ostriches could be slow drivers? 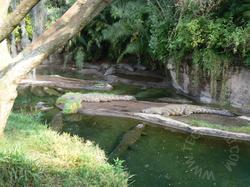 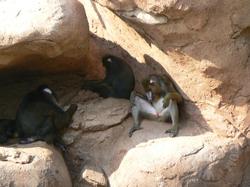 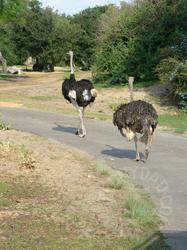 Towards the end of the safari ride, we got word of some poachers in the area. Then the previously slow ride turned thrill ride as we chased after them on some really winding roads. Luckily, the poachers were captured, a baby elephant saved and we ended our ride safe and sound. 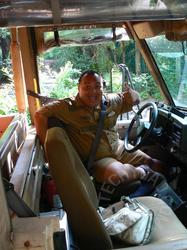 After the safari ride, we all walked from Africa to Asia. Due to the great distances involved, this took us a few minutes. (As another park’s ride says: It’s a small world after all!) NHL, B and B’s father went on Expedition Everest while B’s mother, JSL and I shopped for a bit. 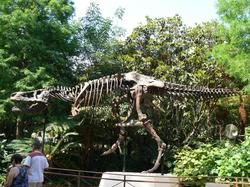 Leaving Asia, we made our way back in time to the Dinosaur era, aka Dinoworld. While B’s parents, NHL and I went on the Dinosaur ride, B took JSL for a walk to try to get him to nap. In Dinosaur, you get to go back in time to see how dinosaurs lived. Secretly, a scientist sends you back to just before the meteor struck that killed the dinosaurs in order to bring back a specific kind of dino. It’s a twisting, turning ride past big herbivores and sharp toothed meat eaters. Eventually, the meteors start striking and you drive desperately trying to avoid them, get your dino and get home in one piece. I won’t spoil the ending, but I don’t seem to have suffered any meteor hits nor have I been stranded 65 million years ago. (If I have, then WordPress’s scheduling feature is *REALLY* great!)

As we exited the Dinosaur ride, NHL said it was too scary. Was this really the kid who braved the Tower of Terror the day before. I guess the dark and meat eaters popping out at him scared him more than a few multi-story plunges. When I asked him what his favorite part was, he replied “When we came back because it was over!”

As we walked out of the dino ride, I got an urgent call from B. “Get over here right away!” We ran as quickly as we could to where B was waiting for us.

It turns out that she had noticed that the Finding Nemo show had a short line and had gotten on it. The show was starting soon and we were going to have front row seating! If you don’t know what the Finding Nemo show is, let me describe it like this: It’s a 40 minute, Broadway quality show retelling the story of Finding Nemo. It was simply incredible. My only two regrets are 1) that it was so dark my photos didn’t come out too well/don’t do it justice and 2) JSL slept through it all. JSL might have been napping, but NHL was transfixed. He had seen the movie before, but just loved seeing Nemo and crew on stage right in front of him. Ah, what the hell, we were *ALL* transfixed seeing Nemo and crew on stage right in front of us. (The photos don’t do it justice.) 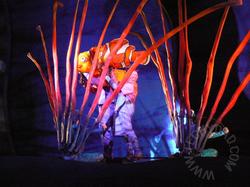 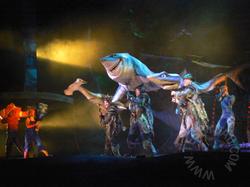 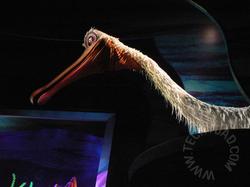 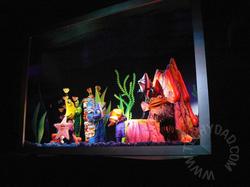 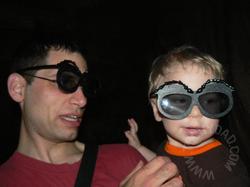 JSL woke up soon after the show ended and we did a little shopping. We also did a little eating at Pizzafari. Then we headed inside the Tree of Life to see the “It’s Tough To Be A Bug” 3D show. Just as we were waiting to go in, however, NHL declared that he needed to go potty. B’s father took him out (knowing that they would miss the show) while B, B’s mother, JSL and I went in. This show was fun, but JSL got scared by a few of the effects. Definitely not one for easily startled little kids.

As we left the show, we saw NHL and B’s father approaching us. NHL was wearing a hat. Yes, B’s father had bought him a hat! We quickly went into the shop and found a similar hat for JSL. Next, we split up for a bit.

We wandered around and found ourselves at Camp Minnie Mickey where we saw the amazing Lion King show. This wasn’t a Broadway-style show like Finding Nemo, but was more people in costumes singing, dancing and doing acrobatics. JSL and NHL enjoyed every minute and clapped along. 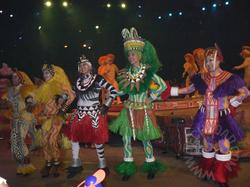 Leaving this show, we saw Pocahontas. Now, previously, JSL and NHL were too scared to approach any costumed characters. But we figured that since Pocahontas was just a woman wearing “funny clothing”, they might go for it. (Bonus was that there really wasn’t a line.) Sure enough, JSL and NHL posed wonderfully for photos. That’s a good tip for dealing with kids with costume-phobia. Introduce them to the most human-like ones first and move up to the giant animals. 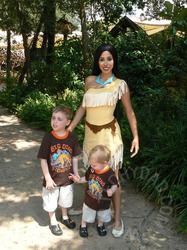 After the photo op, we wandered around some more. JSL and NHL loved sticking their heads into some scenes for photos. One photo I didn’t get happened as we reentered DinoWorld. As we were walking, a crane suddenly flew by B. And by “flew by” I mean “missed by mere inches.” By the time we knew what had happened, the photo opportunity had passed. I did get a photo of the offending bird though so we shall keep an eye out for him on future trips. Finally, we made our way to the Triceratop Spin in Chester & Hester’s Dino-Rama. 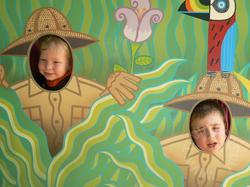 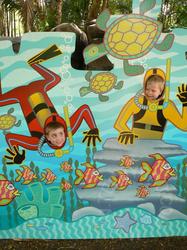 After this, we met back up with B’s parents and took the bus to the Animal Kingdom lodge. Here we had a wonderful dinner at Boma. There were plenty of vegetarian options for me and lots of delicious desserts. I especially loved the fufu which was sweet potatoes, honey and butter. You really can’t go wrong combining those three.

When we got back to the hotel, B’s parents watched JSL while I took NHL to the pools. B followed us after a short while to take some photos. We went into the 90’s pool first (looked over by a giant laptop computer) then we walked towards the Hippy Dippy Pool. We passed a giant Mickey telephone and life-sized foosball table (if foosball players were 20 feet tall). 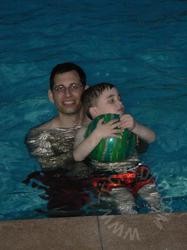 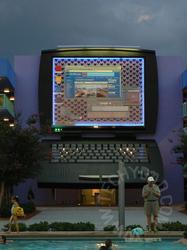 Before we could reach the Hippy Dippy Pool, however, we got sidetracked by what NHL termed the “Goofy Water Squirters.” It was a flat, foam surface with various nozzle holes in the floor and a big statue of Goofy holding a surf board. At semi-random intervals, jets of water would shoot up from the nozzles. The kids there were having fun running from nozzle to nozzle trying to hit just the right ones. In many ways, this was even better than a pool. (Photos of those will come when I describe another days’ events. The low light conditions didn’t make for good photography.)

We finally tore ourselves away from the Goofy Squirters and went into the Hippy Dippy Pool. This pool is surrounded by big flowers that usually squirt water, but they were turned off. (I’m guessing because of the late hour.) We played for a bit in this pool before heading back to our hotel room for tub-time and bed.