On my Wordless Wednesday: Disney World Trips Through The Years post, I revealed that we’ll be going to Disney World.  More specifically, Disney is flying me down to cover the official grand opening of the new Fantasyland.  B’s coming with me, but the kids will remain at home with B’s parents.

While there, we might see the Beast’s castle (where you can eat in the Be Our Guest restaurant), Gaston’s tavern (with antlers in all of his decorating), Journey Under The Sea with The Little Mermaid, the storybook circus area with the twin Dumbo rides, and more.  We should also get to see the re-opening of Test Track in Epcot.

Of course, I’ll be taking plenty of photos and videos.  Some will be immediately tweeted, but others will be saved for blog posts.

My Aloha Friday question for today is: What part of the new Fantasyland would you most like to see? 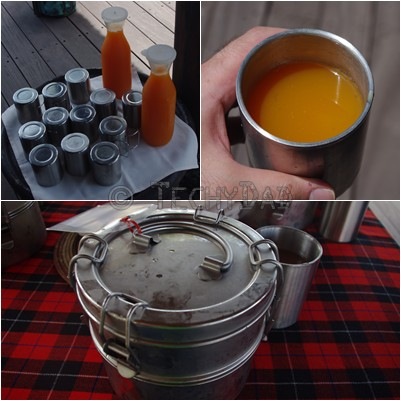 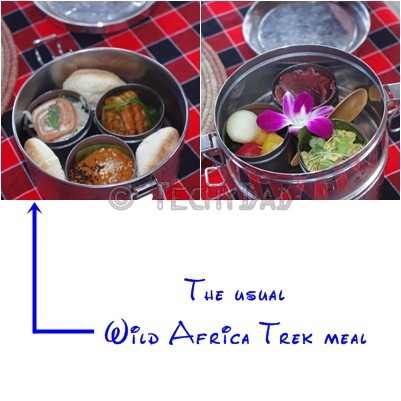 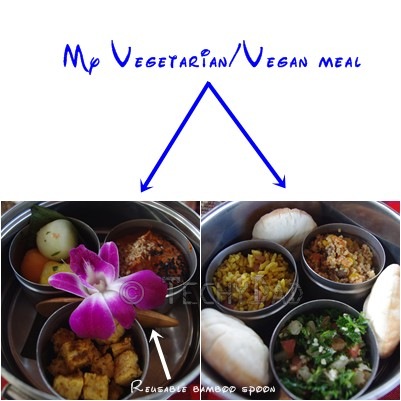 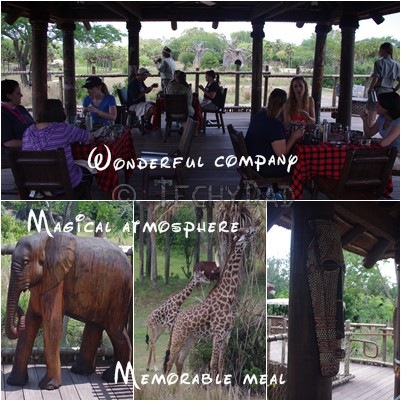 After we left the introductory cocktail reception, I headed over the the beach near the Yacht Club.  (B and I had actually gotten separated during the Adventures By Disney.)  There, I found B, her parents, and the kids.

We were each given a bandana (which some of us fastened around our heads pirate-style) and drinks were offered with cool light-up "ice" cubes. 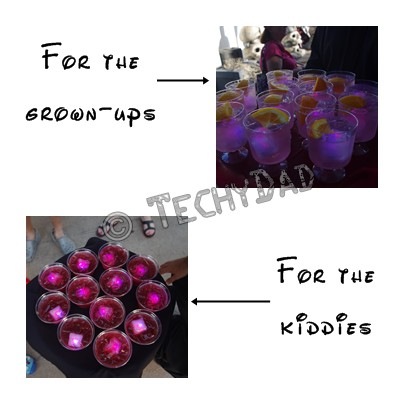 As we entered, we were serenaded by a pirate band and the centerpieces on our tables included a treasure chest.  (NOTE: We didn’t try digging up the beach looking for buried treasure.  That’d be bad form.)  Even the food was being guarded by a pirate. 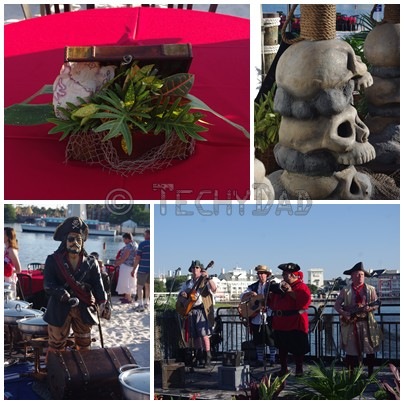 Luckily, the pirate food guard didn’t mind us chowing down on some grub.  And what food there was!  A feast fit for a Captain (Hook)! 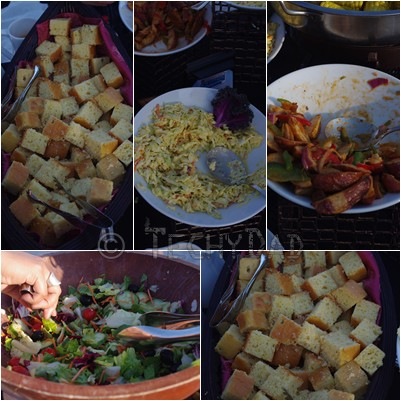 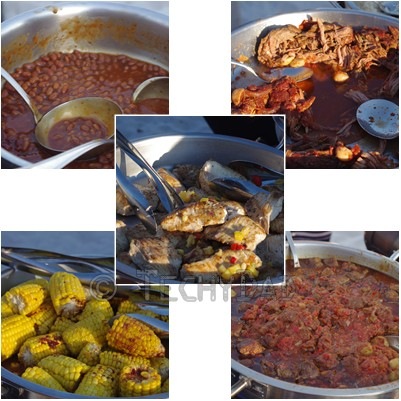 Many of the dishes had a decent kick to them.  Not burn your mouth spicy, mind you.  Disney wasn’t trying to get us to soak our mouths’ in the nearby waterway.  The food did have a spiciness about it that felt perfectly appropriate for a pirate party.  After all, what pirate would choose to eat bland food?

This wasn’t even all of the food, mind you.  There was also a kids table with corn (a non-spicy version), hamburgers, hot dogs, fruit, and, of course, Mickey-roni and Cheese.

Of course, there were plenty of people to meet.  I had finally met Rene Syler (aka Good Enough Mother) in person at the cocktail reception, but we took the opportunity to have our photo taken. 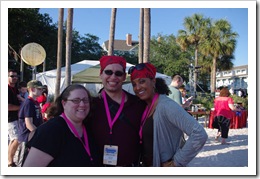 (Hmmm…. Is that dadarocks in the background checking his smartphone?  I believe so!) 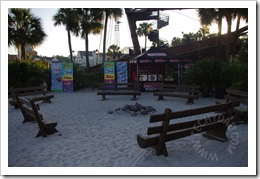 Well, it wasn’t calm for long.  They called all the kids over and started playing some pirate games. 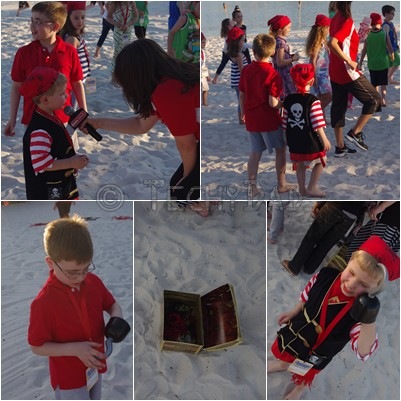 Yes, those are hooks on their hands.  Just like a certain Captain had.  Speaking of whom, he made an appearance with Smee and Jake.  Sharkey and Bones couldn’t make it – I think they were busy cleaning the Jolly Roger – but a pair of singing pirates helped get the kids dancing. 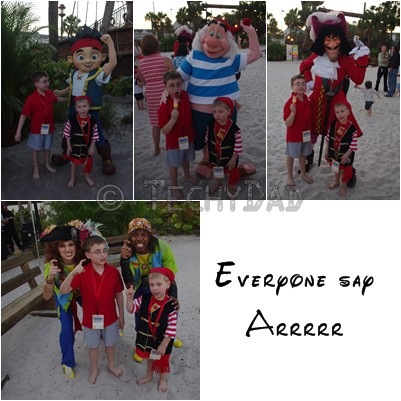 Finally, there were amazing desserts including a fantastic bananas foster and, of course, Mickey Ice Cream Bars. 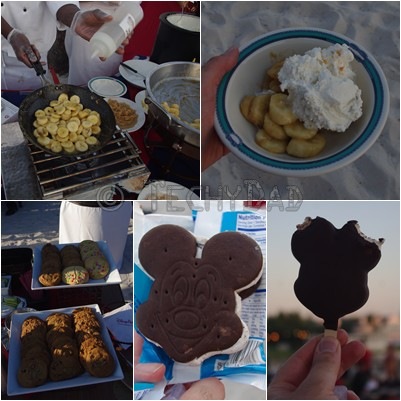 With the sun setting and the kids getting tired, we headed off of the sand for some much needed sleep.  It was a long, but very fun day at Disney World and our trip was just getting started. 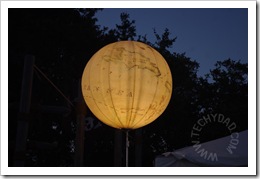 Early in the morning on Thursday, April 26th, we packed the car and headed out.  Though it was chilly, we were wearing shorts and short sleeve shirts.  No, we didn’t misdress the kids.  We were boarding a plane and headed for Disney World to attend the Disney Social Media Moms Celebration.

Soon, we were in the air and, once the pilot cleared our electronic devices, I took a few "way up high" shots.  (If you look closely in the second picture, you can see the plane that passed us – with plenty of room, mind you.) 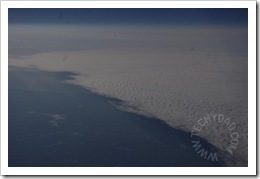 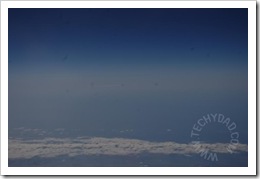 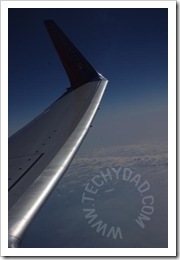 After we landed, the phones came out and the tweeting began.  Excitedly, we monitored the #DisneySMMoms hash tag seeing people commenting on arriving and boarding buses.  I began to wonder if anyone from the conference would be on our bus.  Perhaps someone I had met before on Twitter was standing two groups behind us wondering the same thing.  It turned out that we did have social media company on the bus.  TheToySpy spotted JSL and me and tweeted at us a few times before the bus arrived at the Yacht Club.  We spoke briefly before heading to check in.

For those of you who don’t know, the Yacht Club is one of DIsney World’s deluxe resorts.  It’s very nice.  Wait, I don’t think I emphasized that enough.  It’s *VERY* nice!!!  There, much better.  Don’t believe me?  Here are some photos of our room, bathroom mirror and the view out of our window.  (I wonder if that nice couple by the pool knew they’d be blogged about.  Everyone say hi to Random Anonymous Couple!) 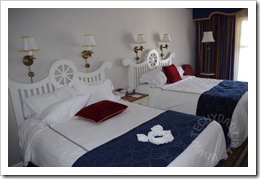 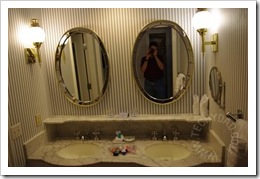 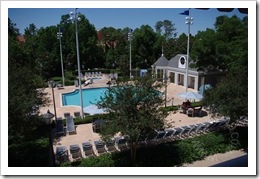 Once we were settled, we checked in to the DisneySMMoms welcome center.  NHL could hardly wait and would keep running ahead to point out the signs. 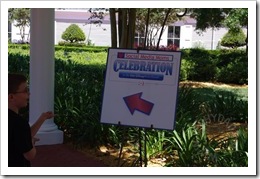 He barely stopped long enough for me to take a photo of this turtle or for us to talk to some other DisneySMMoms attendees.  Seriously, you’d think *he* was attending the conference! 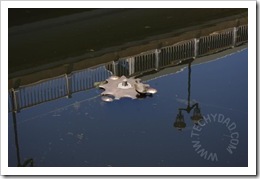 After checking in, I took some stuff we were given back to the hotel room and then caught up with B, the boys, and B’s parents.  Along the way, I saw this being set up for a party later on. 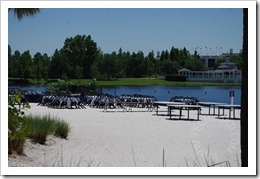 Yes, the party was for us, but you’ll have to stop back another day for that one!  After all, if I covered all of this in one blog post, it would be about six thousand words long and the load time from the photos would be atrocious.

Packing is always a stressful endeavor.  Packing for a return trip from Disney World is especially stressful.  And what happens when you are packing some remaining items early in the morning after getting way too little sleep when you need to leave to return home in an hour and a child’s favorite stuffed animal is missing?  Apparently, that’s when my brain locks up.

NHL has a "travel buddy" that he takes with him on every trip.  It’s not something he sleeps with every night at home, but he likes taking it with him on vacations.  Unfortunately, this seemed to have disappeared a few nights ago and we only realized it as we were ready to leave.  Fortunately, when I called the front desk of Disney’s Yacht Club, they mentioned that they never throw anything out.  Unfortunately, their lost and found department didn’t open until 8:30am and our Magical Express pickup was at 7:30am.  So I left a very coherent voicemail message.

Ok, who am I kidding?  I left a semi-rambling description of the lost item followed by my name and my phone number.  Well, I tried to leave my phone number.  Remember that "brain lock" from before?  Well, that happened.  Suddenly, I couldn’t remember my number.  B tried to help by giving me her number to tell them, but that only confused my locked-up brain more.  We hung up (feeling completely embarrassed, of course) and I composed myself.  I looked at B’s phone number on my phone as I called back and left a better message.

I’ll be honest, I didn’t think we’d ever see the buddy again.  I figured it was gone for good.  But, as we approached the TSA carry-on check, Disney called us.  They had found NHL’s buddy!  They confirmed our home address and told B that they’d ship the buddy to our home.  This was a nice, magical resolution to what could have been a very sad end to our Disney trip.

My Aloha Friday question for today is: Have you or your kids ever lost anything on a vacation?  If so, did you find it again?

Disclaimer: We paid for our own trip to Disney World to attend the Disney Social Media Moms Celebration. Though we were given an incredible deal from Disney, they never asked us to blog about this event.