Our Week In Disney World – Part 8 – A Magical Day

On Tuesday, May 12th, we decided to spend the day at the Magic Kingdom. Indeed, the day was quite magical. As we walked down Main Street in the morning, we saw a painting on the ground. Except it wasn’t done with paint. Apparently, when they wash everything, they spray water so that it makes a certain design. The one that I saw was Goofy with “Have A Magical Day” written underneath. Quite impressive. 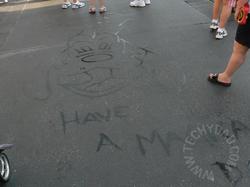 We went first to Tomorrowland where we went on Buzz Lightyear’s Space Ranger Spin. Twice. This was fun, though I’ll admit to preferring Toy Story Mania. Still, Space Ranger Spin came out first, so it’s understandable that the technology would be less state-of-the-art. 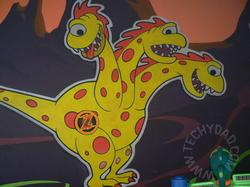 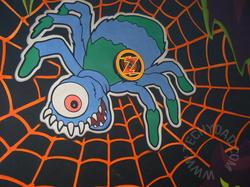 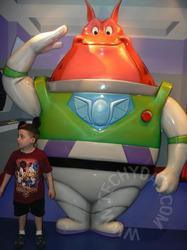 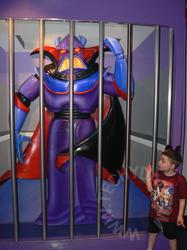 Just before our second time around, we saw Push the Talking Garbage Can. Push is a just normal garbage can. Well, normal except that he can move and talk. Obviously, he is operated by Disney Cast Members from afar. Not too far afar, though, because he interacts with people as they go by. Just one more reason why Disney World isn’t just a collection of rides. (I have a video of him I’ll have to post later.) 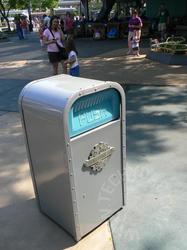 After our second spin, we met Buzz in person. Remember the little character ramp up advice from last time? Well, this was working. NHL had no problem standing next to the “human looking” Buzz and having his picture taken with him. 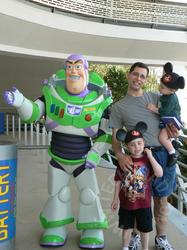 After Buzz, we went on the Carousel of Progress, though not before spying Stitch dressed as Elvis Presley during a show. After the carousel, we proceeded to the Monsters, Inc. Laugh Floor. If you remember the Monsters, Inc. movie, their city (Monsteropolis) was powered by human screams until they found that laughter was more powerful. Instead of going out to houses and entertaining kids, though, they’ve decided to bring a bunch of humans into their world to make us laugh in a big group.

As you enter, you are encouraged to text in jokes which they might use onstage. We didn’t have a texting plan at the time, so we decided not to send any in. Perhaps we’ll send some in next time. You walk through a “monster Portal” into the monster world before entering the theater. Once in and seated, Mike Wazowski comes on to introduce the show with the always monotonal Roz. Their parts are limited though as brand new monsters come in to entertain you. Don’t let “brand new” be mistaken for “unfunny” though. If Monsteropolis is truly powered by laughter, there wasn’t any energy shortage that day! (Perhaps that week.)

Oh and just a warning. Audience members will be selected for “special treatment.” Don’t be surprised if you find yourself on the big screen. All in good fun, of course.

Before entering the Laugh Floor, NHL resisted. He didn’t want to see the monsters. We reminded him that the monsters weren’t going to try to scare him, but make him laugh. Eventually we coaxed him in and he wound up loving it. Given that the show is different every time, we could have easily gone back in, but there’s just so much to see and so little time in the day.

After Tomorrowland, we headed off to Toontown. There, we saw Pete’s Garage (primarily used for its restrooms), Goofy’s Barnstormer Roller Coaster (which NHL and I rode on twice) and Minnie’s house. Mickey’s house is there too, but we’ll get to that another day. 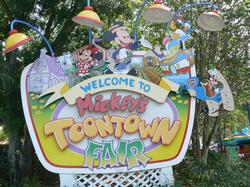 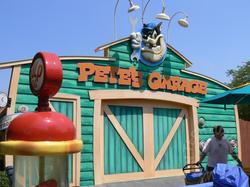 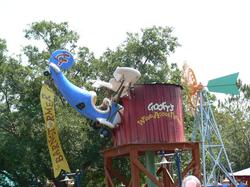 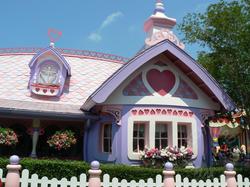 Next, we headed over to see Mickey’s Philharmagic. This is a 3D show where Mickey is going to conduct an orchestra. Unfortunately, Donald has forgotten to set up the stage. Mickey leaves Donald to set up and Donald tries on his sorcerer cap. He plays the instruments a bit using the cap’s magic, but then things go haywire. The result is Donald chasing the cap through Beauty and the Beast, Peter Pan, Aladdin and more. Eventually, the cap is retrieved by Mickey who sets things right, but poor Donald gets blasted by a tuba past the audience and into the wall in the back of the theater.

As we exited, we realized it was lunchtime and stopped by Cosmic Ray’s. Here is where I had about the only bad experience with Disney dining. As many may know, I’m a “vegetarian.” By that I mean that I keep kosher to an extent but it is tricky explaining it when I’m eating out. Instead of saying “I can’t eat pork, shellfish and ham, can eat beef and chicken but would prefer not to so I don’t have to wait for dairy, etc.” I just say “I’m vegetarian” and I can be assured that the resulting meal will be fine by my culinary standards. (I do eat meat from time to time, but it’s a rarity.)

Anyway, we stopped by Cosmic Ray’s and I surveyed the options. I decided on something relatively safe and pretty healthy also: a Greek Salad. While B went to get the food, I found one of the only seats left and got NHL and JSL set up. After what seemed to be a long wait, B came with the food and put it down.

We got the boys eating and then I opened my salad container. I spied something odd atop my greek salad. Ham? Who puts ham on a greek salad. Nowhere on the menu did it mention ham (or I wouldn’t have gotten it). I should have gotten up and asked for another salad sans meat. They most likely would have accommodated me. (Disney is great at that.) I felt pressure, however, to not take up a ton of time with the long lines and crowds so I picked off the ham as best I could and choked it down. If I had to do it over again, I’d have gone back up. I just wish Cosmic Ray’s would better label their dishes. Too many vegetarians would order a greek salad thinking it was a safe, meat-free option. 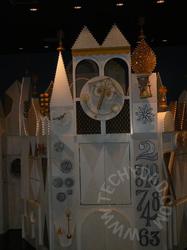 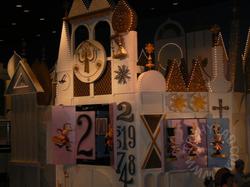 Exiting Small World, we made our way to the Haunted Mansion. As we were on line, we realized that Jacob needed a diaper change. I took him off the line and walked back to a restroom. After changing him, I located B again. To do this I had to skip ahead in line quite a bit. I made sure to tell JSL that we were going to catch back up with Mommy and NHL. This wasn’t so much for JSL’s benefit as it was a not-so-subtle way of informing people around us that we weren’t just cutting in line.

The opening to the Haunted Mansion is quite an spooky show as you are introduced to the house with 999 ghosts. In fact, it proved too spooky for JSL. He hid his face in my shoulder as one room’s ceiling lifted up. As thunder clapped, he gave up entirely and fell asleep. Oh well, it was naptime anyway. I rode the rest of the ride with a peacefully napping JSL on my shoulder.

After this, we made our way across the park to Big Thunder Mountain. First, I went on it with NHL while B stayed with a still-sleeping JSL. NHL loved it so much that he wanted to go on it again. 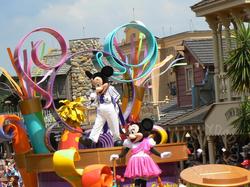 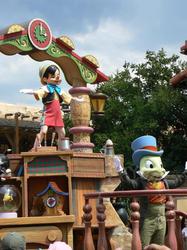 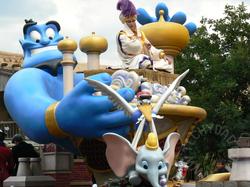 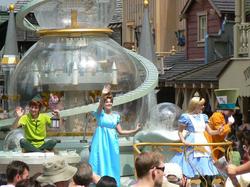 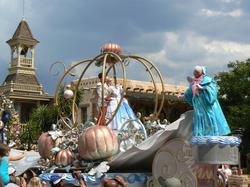 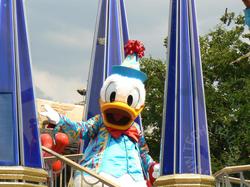 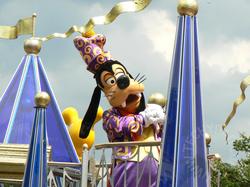 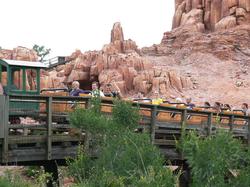 At this point, we decided it was time to go to dinner. We took the monorail to the Contemporary resort and had a wonderful dinner at the Wave. I ate vegetable stew, B had beef tenderloin and NHL shared his pizza with JSL. As with many things Disney, the meal is awesome but the desserts are outstanding. I had the “Crispy and Crunchy” which is “Vanilla-braised Pineapple Spears, Almond-Pineapple-Raisin Baklava, Zucchini-Carrot Cake with Vanilla Panna Cotta.” Excuse me while I wipe away some drool. 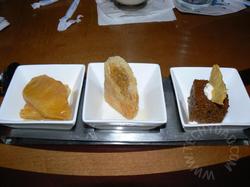 After dinner, we headed back to the hotel for a little wind down time including showers. I also made a phone call to my parents, but the signal strength wasn’t the best, so (as you can see in the photo) I had to position myself “just right.” Finally, we all settled in for some much needed sleep. 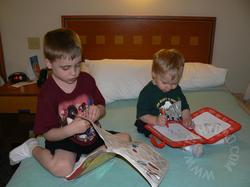 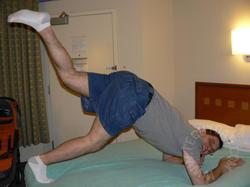 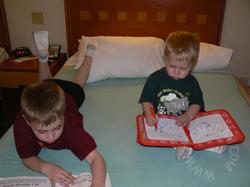 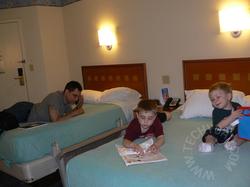