Earlier today, I tried to send a coded message to B via Twitter. I wrote:

Would it be too geeky to tell @TheAngelForever “Number 25 as expressed in binary on one’s hand then translated into ASL”? Yes, yes it would.

Unfortunately, B was too tired to figure out a puzzle. I even sent a hint:

Hint for @TheAngelForever, use this site to find out how to express the number 25 as binary on your hand: http://bit.ly/4vLQf0

After this, she continued to resist spending time on my little game as she was busy doing my laundry. Fair enough, I figured. Still, I wanted her to get the message even if I had to spell it out in a blog post…. so I will.

Let’s start with a photo of my hand: 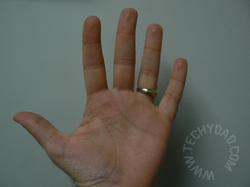 Now, my puzzle first specified that you must express a binary number on your hand. Binary numbers are Base 2. This means that the digits go from 1, 2, 4, 8, etc instead of the 1, 10, 100, 1000 that Base 10 uses. So let’s label my hand with the number each finger would represent 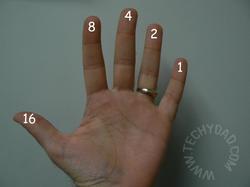 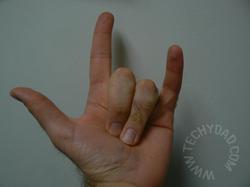 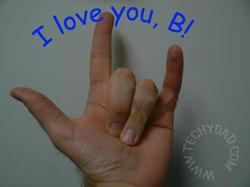