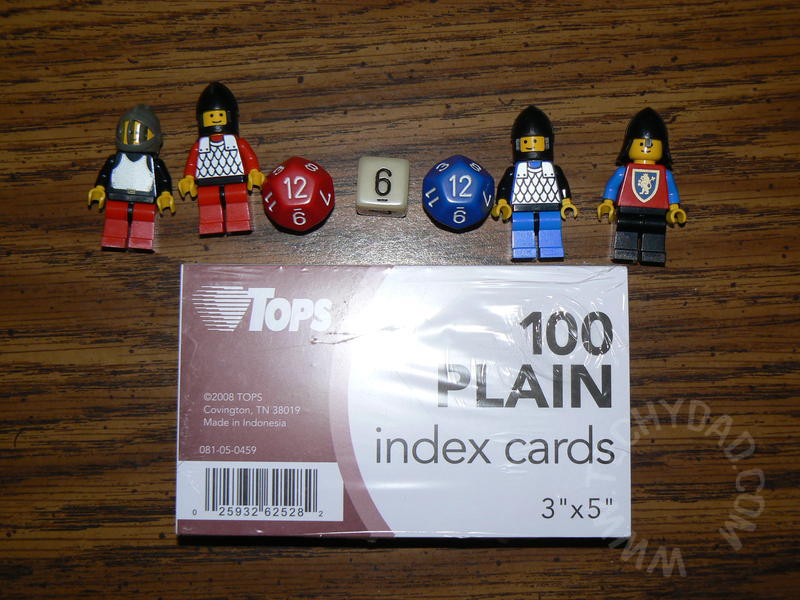 While leafing through Geek Dad: Awesomely Geeky Projects and Activities for Dads and Kids to Share by Ken Denmead (enter to win it at my giveaway here), I picked “Build Your Own Board Game” as the project NHL and I should work on first.

First, we figured out the basic layout of our game. Luckily, Geek Dad supplies a game board layout to use and some pointers. We purchased two packs of index cards (unlined) for 67 cents each. We also bought 3 dice (1 six sided, 2 twelve sided) from a local comics shop for $1.50 and posterboard from a dollar shop (2 for $1). The only other piece we needed were game pieces. For this, I raided a giant set of Legos to obtain 4 Lego figures. The total cost of our materials: under $4 (including tax). 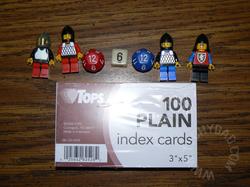 The layout of the game was going to be this: Each player would start with 20 health pieces. On their turn, a player would roll the 6 sided die and more their figure. If the player had under 20 health pieces, they would recover the amount that the die showed (up to 20). If the player landed on a green spot, they’d pick a movement card. If they landed on a red spot, they’d pick a monster card.

I cut some index cards in half and drew hearts on them. NHL colored them in and we had our health pieces. 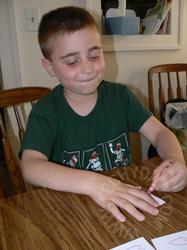 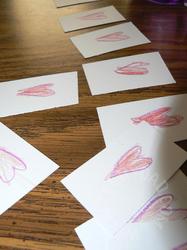 The movement cards simply had my writing. The monster cards had my writing and a drawing (done by me) of the monster which, again, NHL colored in. I also printed the board game across multiple pieces of paper. We’ll glue that onto poster board, have NHL color it in and then possible laminate it.

My Aloha Friday question for today is: Have you ever created your own board (or other kind of) game?