A Change in Plans Leads to Great Sushi at Mr. Fuji 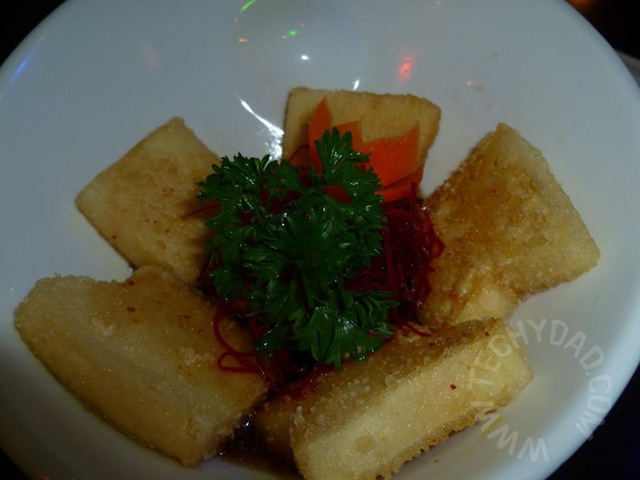 Friday was our 10th wedding anniversary.  Our plans were initially that we would drop the kids off at B’s parents house and then we would go out to dinner at a local Thai restaurant that we’ve been to before.  If we had time, we were toying with a movie or something else.

Unfortunately, fate (in the form of old corroded plumbing) intervened.  The plumbing job took so long that, by the time we left the house, we were pushing against the kids’ bedtime.  And they had anniversary cake for us waiting.  We went to B’s parents’ house and had dessert first.

We couldn’t stay in our house thanks to fumes from some chemicals used during the sink cleanup.  So while the kids were sleeping in strange beds (in B’s parents’ house), they wanted some degree of normalcy.  Meaning, have Daddy stay in their room until they were asleep.  Unfortunately, that took until 9:30pm.

The restaurant we wanted to go to was closed as were many others.  B recalled a new Japanese restaurant that she had heard good things about: Mr. Fuji.  We checked their website and found out that they were open.  Score!

With the kids safely in bed, and the clock pushing 10pm, we made our way to Mr. Fuji for dinner.  Given the time and our appetites, we decided to skip a big main course and instead have a dinner comprised of 2 appetizers and 3 sushi rolls.

The first to come out was the Age Tofu.  This tofu might be deep fried, but it was not greasy.  Instead, it had a nice crunch to it and the sauce was delicious. 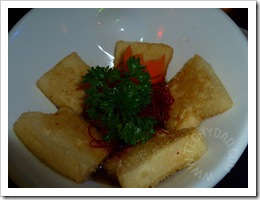 Up next was the vegetable tempura.  I’d say this was our least favorite dish, but that would give the impression that it wasn’t tasty.  It was very tasty.  The vegetables were big and nicely fried.  The only “problem” was that the rest of the food was so exceptional that the tasty vegetable tempura wound up in the back of the pack. 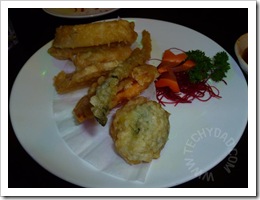 Up next was our sushi.  See if you can identify the rolls.  (Click on the photo below to see a larger version.) 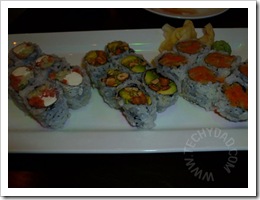 Let’s begin with the ordinary.  A Philadelphia roll.  For the non-sushi aficionados, that’s smoked salmon, cream cheese and cucumber rolled up in rice.  Yes, it’s a Japanese version of bagel-lox-and-cream-cheese and it is tasty! 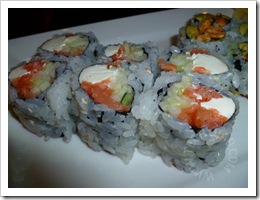 Up next, is a favorite of mine that I’ve seen in a few places.  The sweet potato roll.  This isn’t just sweet potatoes rolled in rice, though.  It is first fried tempura-style and *then* rolled in rice.  This adds a crunchy texture to the soft rice and sweet vegetable filling. 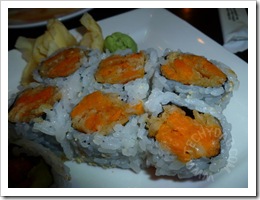 The big win of the evening, though, and the roll that will become a *must order* every time we go back to Mr Fuji, though, was the Peanut Avocado roll.  I’m going to let the pictures describe the roll first.  (As always, click to enlarge.) 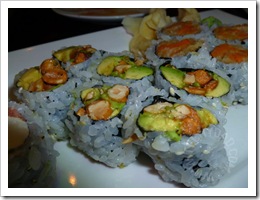 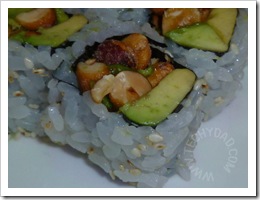 Yes, that’s peanuts in a sushi roll.  And not just any kind of peanuts, but honey roasted peanuts.  Delicious!  I could have eaten five more of these roll.  Ok, maybe not.  My stomach would have gotten full before they were done, but my taste buds would have kept screaming for more.

As I said before, we ate dessert before this meal, so we opted not to get any more dessert.  Still, the tempura cheesecake sounded good and the looked good when it was brought to the table next to us.  That will be a major temptation the next time we go there.

The staff was wonderful and the service was prompt.  In fact, when they heard it was our anniversary (and about our plumbing woes), they insisted that we couldn’t leave without some kind of dessert and presented us with a small plate of watermelon.  B was too full to eat any, so I ate the entire thing.  I just wish I thought to get a photo of it before I tore into it, though.  The four long watermelon triangles were arranged upright in a square.  It almost looked like some kind of watermelon flower.

Now, if you’ll excuse me, I’m going to drool a bit while I think about the peanut-avocado sushi.  YUM!

Disclaimer: I wasn’t compensated for this review in any way.  We just found a nice restaurant and I wanted to blog about their great food.