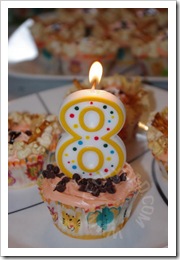 Today, NHL turns 8 years old.  In some ways, it seems like only yesterday that B leapt off the couch, ran to the bathroom and announced to me (when I ran after her to see what the problem was) that her water broke.  In other ways, it feels like NHL has been with us forever.  How is it that he can both be growing up so quickly before my eyes and yet my life before he was born seems so far away it might as well have been an alternate-dimension TechyDad?

In any event, today we celebrate NHL turning 8.  When he was a baby, he loved making everyone smile.  I particularly noticed that he liked getting the attention of women in stores.  He would look at them cutely, then look away and repeat his actions until he got their attention.  My son wasn’t even a year old and he was already a flirt!  (Is this a sign that I should be worried a few years down the road?)

When he was a toddler, he initially had trouble walking (due to low muscle tone and other issues), but made quick strides with therapy.  He was a social kid and very inquisitive.  He loved reading and computers.  In fact, I noticed that he had quite the knack for technology.  He would pick up how to work things, like the DVR remote, very quickly.  We finally had to move the DVR remote to a place he couldn’t reach because the DVR filled up with shows he decided to record.

As NHL got older and began attending school, his thirst for knowledge grew.  He would pick up on facts where ever he could find them.  I began seeing more and more of  myself in him for better and for worse.  At times, it would seem like he couldn’t stop talking, but I could sympathize.  I did the same thing when I was younger.  He likely has a million thoughts piling in his brain and no place for them to go.  We’ll need to get him a better outlet for this than random babbling.

Unfortunately, NHL had a rough 2nd grade.  He complained of not having friends and his teacher didn’t quite seem to know how best to work with him.  Sadly, a bullying incident forced us to pull NHL from school.

It wound up being a blessing in disguise, however, because NHL thrived in his new school.  He made friends and began wanting to learn again.  When school ended, he actually burst into tears thinking that Summer vacation meant he had to stop learning.  Now those are tears that every parent loves to see!  (So long as the child stops crying, like NHL did, when reassured that they can keep learning, of course.) 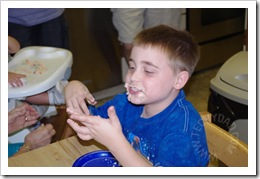 He had a blast during summer vacation going to the water park, crafting events, library time, and even just plain playing in the park.  He also mimicked young-me by becoming hooked on video games.  (Of course, my addiction was the Atari 2600, not the Nintendo DS.)

The upcoming year will be an interesting one.  How will NHL react to the third grade?  For me, third grade was a wonderful time.  My teacher realized that I should be in an advanced reading class.  This led to honors classes which led to AP and college level courses.  Will NHL’s third grade be as good for him?  I don’t know, but I can’t wait to see what comes next.