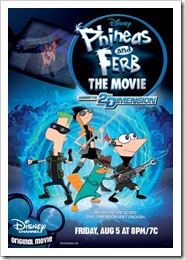 Friday was the long awaited day.  No, not anyone’s birthday.   It was the premiere of Phineas and Ferb: Across the 2nd Dimension.  The boys had been looking forward to this movie since the commercials first began airing.  They are huge Phineas and Ferb fans and the prospects of a Phineas and Ferb movie excited them.  (NOTE:  If you haven’t seen the movie, I’ll try to not give away the ending, but you really should watch it before reading this.)

As the movie opens, Phineas and Ferb begin to have just another ordinary summer day.  Of course, in this case, “ordinary” means “building a pair of giant Platypus shaped launchers and a giant shuttlecock they can ride in to propel themselves across the city.”  Something goes wrong and they crash into Doofenschmirtz’ latest inator.

Phineas and Ferb fans know, of course, that Doof and the boys never really meet.  There are a few close calls here or there, but the evil scientist and the boys are from two separate identities that Agent P/Perry the Platypus possesses.  Perry is forced to hide his Agent P identity (as revealing it would mean being taken away from the Flynn-Fletcher household that he loves so much).  As such, he can’t stop the boys from helping Dr. D (as they call him) from repairing his Otherdimensioninator and opening a portal to another dimension.

This dimension contains a warped world where Doofenschmirtz rules with an iron fist, the boys are conformists who don’t know what summer is, Perry is a cyborg working for Doofenschmirtz and Candace secretly runs the rebellion.  The Evil(er) Doofenschmirtz is intrigued with the idea of a whole new Tri-State Area to conquer and the boys seem unable to return to their home dimension.  This sets up the bulk of the plot.

Meanwhile, Perry’s cover is blown leading to something amazing in a cartoon aimed at kids: actual emotional progression.  Phineas goes from angry and hurt to accepting.  The progression never feels forced.  The emotional resolution is very touching as well.

Of course, there’s action too.  Tons of action.  Candace-2 takes out a dozen or so Norm-Bots (the evil robot minions of the second dimension’s Doofenschmirtz) with some help from Perry and the boys.  Our gang is forced to confront a Goozim (giant, hairy beast the size of a two car garage… if not bigger).  And, of course, there’s the ending battle back in Phineas and Ferb’s home dimension against thousands upon thousands of Norm-Bots in which…

Well, you’ll just have to watch to see what happens.  I’ll just say that the boys and I were practically jumping up and down on our couch with excitement during this scene.  I believe this annoyed B quite a bit but it’s an amazing climatic action scene.  Did she think we’d sit unemotionally still?

We’ve already watched it two or three times.  (Thank you DVR!)  I purchased the soundtrack and the boys and I rocked out to the songs from the movie.  I might even pre-order the movie on DVD for them.  I always recommend the Phineas and Ferb series to people and this movie is no exception.  Now, if you’ll excuse me, I think I’ll blare “Robot Riot” a bit.