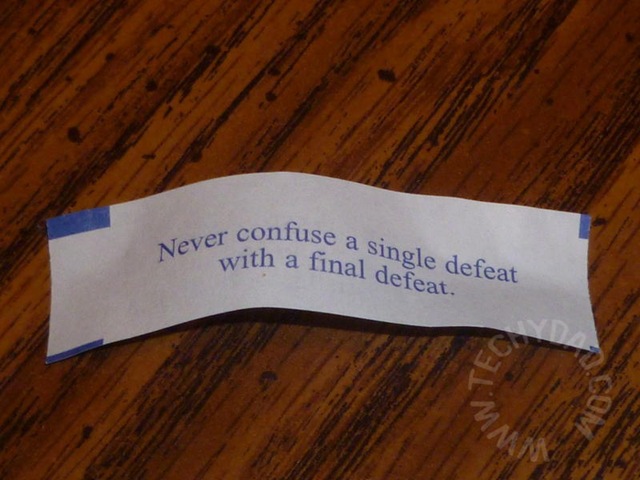 This year, NHL was able to join his school’s band and choose an instrument.  He decided to select the drums.  Last night, he had his first concert.  The days preceding it were filled with him getting more and more anxious about the big day.

I tried to calm him down with a tale about one of my concerts when I was growing up.  I quickly realized why this wasn’t a good story and shortened it.  I told NHL that I was very nervous and my orchestra teacher gave me the option of not going onstage.  I decided to go through with it and had a great concert.  All this is true, but (for NHL’s sake), I left out the part where my nerves overwhelmed my stomach and I hurled in the hallway.  I don’t think that detail would have helped him any.

Even NHL’s fortune cookies seemed to be telling him to push through. 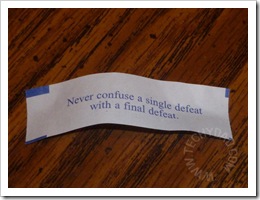 In any event, the big day came and NHL went off to his band.  Up first was the orchestra.  While they played, memories began flooding back.  As I mentioned above, I was in the orchestra.  I played violin for many years.  I was actually kind of coerced into playing.  My orchestra teacher at the time seemed overly anxious to get me to join.  He asked me how I would respond if, in a future job interview, I was asked what instrument I played.  Naive kid that I was, I didn’t want to risk my future employment by not being able to play a violin.  (You’d be surprised how rarely that question came up in my job interviews, though.  It’s almost as if employers don’t care whether their web master can play a violin!)

In any event, the orchestra at NHL’s school began to play a tune pizzicato.  This means that they didn’t use bows, but instead plucked the strings during the songs.  Suddenly, my fingers began tingling.  I could almost feel those thin, metal strings digging into my index finger with each note played.

Then, watching the kids’ fingers move, I remembered the anxiety I felt over my finger placement.  There are about 8 different places your fingers could rest on the strings (including one position with no fingers on the strings).  Each finger-string placement results in a different note.  There are also 4 strings.  Which string to play and which finger placement to use is represented by one note.  Just one.  When you look at the sheet music you need to see the note, remember that this means to play this particular string with these fingers in place, get them in place, play the note, and then move on to the next note.  I was never very good at this.  I just could not do all this fast enough.

NHL, luckily, chose the drums.  Although this entails playing the bells (aka the xylophone), for which he does need to hit certain keys at certain points, the drums mainly require him to keep a steady beat.

When his time came, NHL went up with 2 of his drumming classmates and played Mary Had A Little Lamb.  He did a fantastic job and we were all very proud.  NHL realized that his nervousness before the concert faded away and he had a blast.

When you were in school, did you play an instrument? If so, were you nervous before performances?