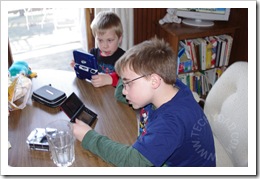 I think I’m raising a pair of video game addicts.

A couple of weeks ago, we went to visit my parents.  While there, they insisted on buying the boys a gift.  I tried to steer NHL to a Transformer figure since he loves the show, but both he and JSL wanted more video games for the Nintendo DS.  At first, I’ll admit that I was against it.  We have plenty of games and I didn’t think NHL needed another one.  After awhile, though, I accepted it.  Especially after we found Lego Indiana Jones for the Nintendo DS.

NHL loves the Lego series.  He has (and has finished) both of the Lego Harry Potter games and has the Lego Star Wars game as well.  Since we recently introduced him to Indiana Jones (specifically, Indiana Jones and the Raiders of the Lost Ark), we figured he might like this.  (Plus, I wouldn’t need to help him changing this "toy" from a vehicle to robot and back.)

JSL, meanwhile, really needed some games.  Most of the games we have for the Nintendo DS are for NHL’s skill level (if not higher).  JSL can try these, but he’s probably just going to wind up frustrated.  He wound up getting a dinosaur game that is perfect for his age level.

As soon as possible, the boys loaded up their new games and began playing.  Then, they swapped games and played each other’s games.  They’ve been playing them (or begging to play them) ever since.

That’s not it, though.  Even before this, the boys would keep asking me when a certain game was going to be released.  They counted down the days and, when it finally arrived, they waited impatiently while I downloaded and installed the playable demo.  They were hooked on the previous versions, are hooked on this version, and will likely get hooked on the mobile versions once we get our smartphones. 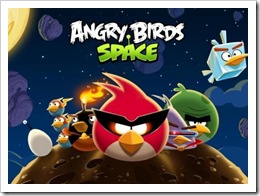 Yes, my boys are in love with the Angry Birds.  They’ve tossed the birds at pigs in many environments.  Now they need to take into account orbital mechanics to defeat the piiiigs in spaaace.  (Oops, sorry.  Wrong piggies.)

With all of the video games they like playing, it’s no wonder that I suspect that I’m raising a pair of gaming geeks.  I don’t know where they get it from.  Now, if you’ll excuse me, I need to play some Lego Indiana Jones on the Nintendo DS.