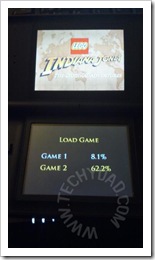 NHL loves the Lego video game series for the Nintendo DS, especially the Lego Indiana Jones game that he recently got.  He’ll sit down and play it for hours, shattering everything in sight and besting minifig enemies left and right.  He prides himself on the progress made, new characters unlocked and new areas found.

Meanwhile, his younger brother loves doing what his older brother does.  He doesn’t quite understand how to play the game well and he can’t read the menus, but he loves sitting down with the DS and playing his brother’s game.

Can you see the catastrophe coming?

A couple of nights ago, NHL sat down to play some DS, let out a scream, and began tearing up.  We rushed over to see what was the matter.  His game was at 0% completed.  All of the hard work he had put into his game over the past two weeks was gone.  All the unlocked levels and characters, erased.  He was sent back to the very beginning and was understandably upset.

What happened was immediately obvious.  JSL had started the game to play it, hit a bunch of buttons and somehow deleted NHL’s game.  Of course, being upset, NHL yelled at his brother over this which sent his brother into tears (and running into his bed, JSL’s usual "hiding" spot when he’s upset).  A parenting split-team play ensued.  I soothed JSL and told him that we weren’t mad at him.  However, I let him know that he did hurt NHL, even though it was unintentionally, and he should apologize.  B reassured NHL that his brother didn’t mean to delete his game.  She also let NHL know that he could get everything back by playing the game again.

There were some tense moments between the brothers as JSL obviously wanted things to go right back to normal and NHL didn’t want his brother around for fear he would somehow disrupt his game again.  Thankfully, by the end of the night, they made up (hopefully for good).  JSL will now refrain from playing that game and we’ll look for another Nintendo DS game for him.

Anyone know of a good Nintendo DS game for a nearly 5 year old?