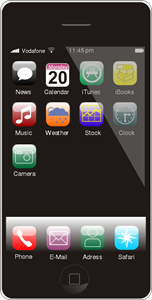 Way back in the day, the sound that a cellphone made when it rang was set by the manufacturer.  You had the option of listening to it or turning it off.  Then, someone got the bright idea that cellphones should play bits of music when they rang.

Fast forward to the present day and your average smart phone can play any MP3 file you throw at it as a ringtone.  This means your favorite song can announce that your spouse is calling you or Darth Vader’s theme song can declare that your in-laws are on the line.  (Not that I’d do that, of course!)

I’ve bounced from ringtone to ringtone over the years.  From Star Wars to the Muppets, each of them reflected some aspect of my geekiness.  My latest declared my love of Doctor Who.  In fact, it was the Doctor Who theme song.

Unfortunately, while the Doctor Who theme makes for a great song, it can be a bit grating as a ringtone.  Especially to B’s ears.  So I’m on the hunt for a new ringtone.  One that will express my geekiness but without causing B auditory discomfort.

I’ve already gone through the TARDIS sound (also annoying), a Dalek (B said that she’d EXTERMINATE me if I used it), and the sonic screwdriver (worse than the theme song).  For now, I’ve settled on "I Am The Doctor" which is the song that plays in some Doctor Who episodes as the peril comes to a head and The Doctor heads into the fray.  We’ll see if I keep this one or if it winds up replaced with something else.

What do you have set as your ringtone?  What geeky ringtone would you recommend?

Note: The "smartphone" image above is by zorro and is available from OpenClipArt.org.