The Times That Bond 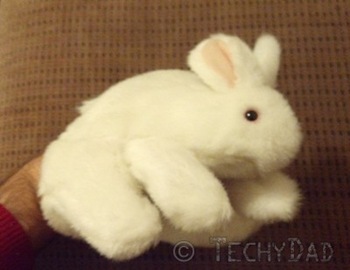 Last night, after both boys were in their PJs, NHL went to play on B’s iPad.  JSL, meanwhile, decided to play with me.  We crawled under my slanket (yes, I still use that after 3 years) to shut out the light and played with some of his stuffed animals.  I took his "super bunny" puppet (a plain, white rabbit puppet that I make "fly" by virtue of the fact that I hold it off the ground) and began to make it speak.

Super Bunny and JSL had a few conversations and then JSL decided to let Super Bunny on a sad fact of life: He is just a puppet.  No matter how much JSL pointed out that I was making him speak and move, though, Super Bunny just didn’t see it.

The funniest moment came when JSL decided to show Super Bunny that he was a puppet.  He reached for the section where you put your hand in – the read of the puppet.  Of course, Super Bunny reacted by moving off – offended that JSL would try to stuff his hand back there.  After all, that’s disgusting!

In the end, JSL and I had a blast and he went to bed happy.  We even confused B when JSL walked up to her to tell her that you should never put your hand up someone’s rear because you don’t know what’s in it.  Sadly, however, Super Bunny has yet to come to terms with being just a puppet.