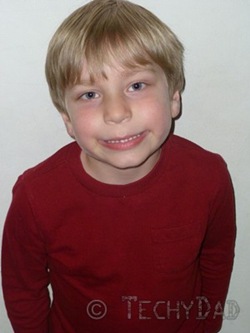 Today would have been JSL’s birthday, but we cancelled it.  You see, he’s growing up too quickly.  We decided we liked 5-year-old JSL too much to give him up.  So we’re hitting the pause button and he’s staying 5 forever.

Rats, I seem to have misplaced the pause button. I know I had it here a second ago.

Well, it looks like JSL’s having his birthday after all.

This past year has been a big one for JSL.  He started it off in pre-K and not knowing many of his letters.  He is ending it a Kindergartener (but soon to be first grader) who not only knows all of his letters, but knows how to read and write stories as well! He’s also become adept at simple addition as well.

JSL has shown that he’s got a huge imagination.  He can entertain himself for a long time playing with toys on the floor or magnets on the refrigerator.  He makes up storylines and characters and acts out what they do.

He’s also turning into quite the little geekling.  He loves Teenage Mutant Ninja Turtles, all things Disney, Transformers, playing on the computer/iPad, or reading books.  He also loves riding his bike around the block with me.  (I walk currently, but I’d love to get a bike to ride.)

I’m so proud of my not-so-little-anymore kid.  Happy birthday, JSL!