An Embarrassing Tale On The Lake 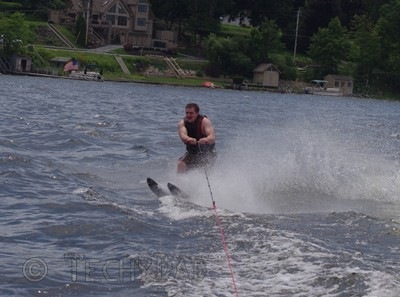 Last weekend, we went to the lake.  I wrote about that a bit, but there was one thing I didn’t write about.  An embarrassing incident of mine.  Thankfully, what is embarrassing often makes good blog fodder.

During the boat trip, Cousin A first jumped out of the boat for a bit of water skiing.

The kids were in awe as he bounded on top of the water seemingly effortlessly.  He made it look so easy.  Still, I remarked that there’s no way I’d do that.  I’m way too uncoordinated for such an activity.  I’d probably somehow wind up upside down or tangled in the rope.  Don’t tell me that’s impossible.  I’d find a way.

Cousin A even proved to us that he doesn’t need two skis.  He went up on a single ski. 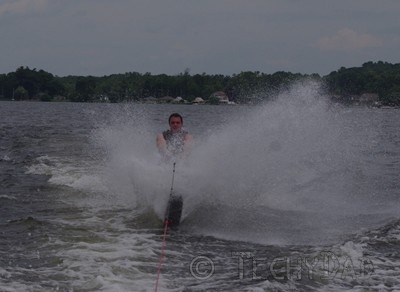 After this, we decided to take a dip in the lake.  First, we got to a nice sandy spot that was shallow enough for the kids to walk (though they kept their life jackets on).  Some people jumped in.  Some carefully slid in.  Me?  Well….

First, I need to back up a bit and describe the boat.  This was a new boat that Uncle M had bought.  It has three pontoons underneath it which helps keep it from capsizing.  (That actually almost happened to us on the last boat which only had two pontoons.)  The pontoons extend just past the front of the boat and curve upwards a bit.

As I slowly edged towards the end of the boat, deciding to carefully slid in, I noticed something was wrong.  My swimsuit was snagged on the pontoon.  No problem, I thought, I’ll just unhook it.  Unfortunately, at that exact moment, I also realized that my weight was shifted too far off the boat.  Gravity was in play and I was going in the water.

As the top half of my body went down, my snagged swim trunks kept the lower half of me in the air.  I hit the water hard, back-of-the-head-first.  Mercifully, my swimsuit didn’t rip, yank off, or stay lodged keeping my head under water.  Instead, it came loose and my lower half slammed into the water a split second later.  I sunk to the bottom (about four feet down), reoriented myself, and kicked back to the surface.

I wasn’t hurt badly, just a little bruise on the back of my leg.  I was more embarrassed than anything.  If there’s one thing I’ve learned in life, though, it’s "When you’re embarrassed, laugh at yourself."  I immediately joked to everyone that THIS was exactly why I wouldn’t be water skiing anytime soon.  After all, why would I get on skis behind a moving boat when I can’t even get off a stopped one safely?

The rest of the trip was a lot of fun, but every time my leg ached, I’d quietly relive the embarrassing moment again.

Have you ever been publicly embarrassed?  What was your reaction?