It’s Time To Meet The Muppets in My Muppets Show 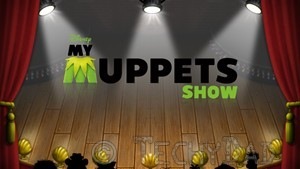 I’ve been a fan of the Muppets for a very long time.  When I was a kid, I used to love watching The Muppet Show on TV.  Then there were the many Muppet movies.  They always promised some hilarious, slightly out-of-control fun.  After that, I would regularly watch Muppet Babies and awed at how the Muppets – as little kids – would have amazing adventures.  (I just wish Muppet Babies was available on DVD or on Netflix.  My kids would love it.)  Recently, we all fell in love with the Muppets again with their movie and their YouTube shorts. 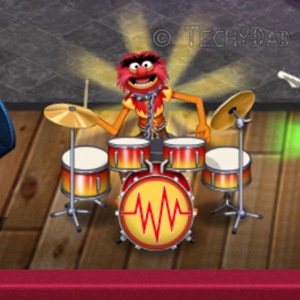 A week ago, B found out that there was a new game for Android phones: My Muppet Show.  (Apparently, it had been available for iOS for awhile but just made the Android leap.)  Within minutes, it was installed on B’s phone, JSL’s Galaxy Tab 2, my phone, a spare Android phone that NHL uses for gaming, and our iPad.  The boys and I were hooked instantly and soon the sounds of Muppet performances were echoing through our house.

The premise of the game is that Dr. Bunsen Honeydew has come up with a new invention – the Digitzer.  Using this, he can transport Muppets from the real world to the digital one.  You transport Muppets to your digital stage, but it isn’t glamorous to start with.  Instead, it’s run-down with garbage strewn everywhere and cramped, tiny dressing rooms.  Thankfully, though, it doesn’t stay that way. 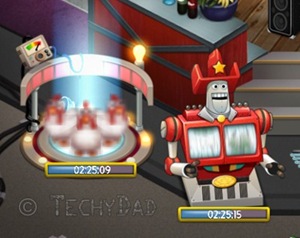 As your Muppets perform, they earn money.  Money can be used to remove trash, buy dressing room upgrades, and purchase various enhancements.  Some of these enhancements will make your Muppet performers happier.  And happier Muppets earn you more money.  Money can also be used to buy food which – when fed to your performers – allows your Muppets to increase their level which, in turn, means they earn even more money.  Along the way, your various actions (including completing tasks assigned to you by Scooter) gain you experience points which unlock more characters and enhancements. 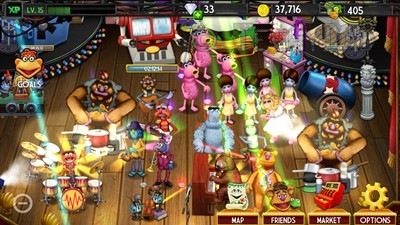 You can even become friends with other players and visit their stages to see what they have and how they arranged their performers/items.  You can get friends via Facebook, Twitter, or e-mail.  In a stroke of genius, you can also just enter a person’s friend code to add them as a friend.  (You become their friend as well automatically.)  This is so simple that NHL discovered this feature the second day he played it (before I found it) and he set it up so he and his brother were friends. 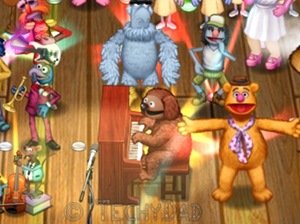 This game is very addictive.  I can’t stop playing it and love seeing all of my Muppet performers strutting their stuff.  I love watching the Digitizer slowly forming a new Muppet and hoping it is the one I was trying to get.  (Dr. Bunsen Honeydew’s inventions aren’t 100% reliable.)  By the way, my friend code is 777218FE.  If you get addicted to the game the way I and my boys have gotten, feel free to let me know and add me as a friend.  I’ll stop by your stage to see how your Muppet performers are doing.

Coincidentally, the teaser trailer for the Muppets’ next movie was just released yesterday.  This looks like it’s going to be tons of fun.  I can’t wait for spring 2014!