Room On The Broom DVD Review/Giveaway 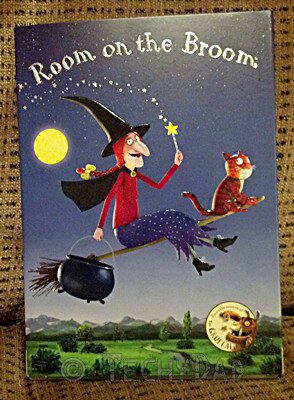 I’m a sucker for stories with lessons.  I also love when books are turned into films, though I’m always wary when a short story is turned into a longer movie.  It’s easy to bog down the story with unnecessary details, completely ruining the tale.  Thankfully, Room On The Broom is exactly the opposite of this.

The book was fantastic.  A witch and her cat would keep losing items of hers.  Animals would kindly return them and ask to ride on her broom.  The witch would agree until the broom was so overloaded that it snapped in two.  Unfortunately, one animal – a dragon – was not so kindly and tried to eat the witch.  The animals had to work together to try to save their friend.

The movie follows the same plot, but you begin before the witch and cat even take off for the first time.  Instead, you get to see some of the cat’s life alone with the witch.  As each item is lost and found, the animal returning it gets fleshed out more.  The dog is eager – bounding around the witch and sniffing the broom.  The bird is green – while all other birds were black and excluded her.  The frog was clean – in stark contrast to the messy frogs surrounding him.

While the witch is glad to have more friends, the cat sees each new animal as a threat to its life with the witch.  It tries to deny them access, but the witch is too kindly and takes them all in.  The cat must learn that these “intruders” are actually friends and work with them when the witch’s life is in danger from a scary dragon.

I loved how the movie not only used plot elements from the book, but took minor illustration components and turned them into scenes.  For example, one picture in the book showed them flying over a crane, sheep, fish, and beaver.  In the movie, this turned into a series of scenes where these animals turn up as they search for the witch’s wand,  In addition, the added elements (such as the cat’s annoyance towards the new animals) made the story even better.  I would definitely recommend both the book and DVD to parents for both entertainment value and the lessons they can teach children.

One of my readers will win a copy of Room on the Broom on DVD.  To enter, follow the steps in the Rafflecopter widget below.

Contest starts today, August 21st and ends at midnight on September 7th. You do not have to be a blogger to enter, but must leave a valid e-mail address for me to contact you for your mailing address once the giveaway is over. I will select the winner using Rafflecopter and contact you via e-mail. You will have 48 hours to claim the prize. If there is no response, another winner will be selected. Open to U.S. and Canadian residents only.

Disclosure: I received both the book and DVD version of Room on the Broom to facilitate this review/giveaway.  All opinions expressed above are my own.